Update Required To play the media you will need to either update your browser to a recent version or update your Flash plugin.
By Dan Novak
08 January 2023


Many migrants are arriving at the U.S.-Mexican border in need of medical and mental health treatment.

Dr. Brian Elmore volunteers at a health center in Ciudad Juarez, Mexico. The city is on the U.S.-Mexico border. Elmore has treated about 100 migrants for viruses affecting the lungs and some for emergencies. 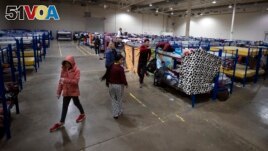 But he said trauma worries him the most.

"Most of our patients have symptoms of PTSD — I want to initiate a screening for every patient," said Elmore who is an emergency doctor at Clinica Hope. PTSD stands for post-traumatic stress disorder. It is a condition of extreme tension caused by a shocking or severe event in the past.

But there are few resources for this kind of care. Shelters have been flooded by new arrivals and migrants who have been in Ciudad Juarez for months. Only the most severe cases are treated.

"Like a pregnant 13-year-old who fled gang rapes, and so needs help with childcare and middle school," said Zury Reyes Borrero. Borrero works in Arizona with the Center for Victims of Torture. He said he visited such a girl when she gave birth. "We get people at their most vulnerable," he said.

In the past six months, Reyes Borrero and a coworker have worked with about 100 migrants in Catholic Community Services' Casa Alitas. It is a shelter in Tucson, Arizona. In December, Casa Alitas was receiving about 700 people daily released by U.S. officials. They came from countries including Congo and Mexico.

Each visit can take hours, as the case workers try to build trust with migrants, Reyes Borrero said.

Most migrants are traumatized by what they left behind or what they saw on their trip, said Leonce Byimana. He is director of U.S. clinical services for the Center for Victims of Torture. He said the migrants need "first-aid mental health" as well as long-term care that is even harder to get once they leave the shelters.

Left untreated, trauma can get worse to the point where it requires psychiatric care instead of treatment and self-help, said Dylan Corbett. He is the Hope Border Institute's director, the group that operates Clinica Hope.

Reports say there has been an increase in pregnant women and girls in the border area. Some are victims of attacks. Some are younger than 15.

Volunteers and activists have used limited legal, medical and other resources to help these victims. The situation has left hundreds of other victims of political violence and organized crime without help.

In many cases, forensic tests at border medical centers that aim to record mental and physical abuse are very important to migrants' asylum cases. Byimana said often no other evidence is available for courts to make asylum decisions. Asylum is given to those who cannot return to their countries for fear of harm or violence. That can include violence against women.

But it takes years for asylum cases to be decided in U.S. immigration court. Syracuse University's Transactional Records Access Clearinghouse, an information center, said more than 1.5 million people are waiting for their cases to be heard.

Activists say a long wait for asylum and a long trip through many countries can worsen the trauma that migrants experience.

Sarah Howell treats migrants suffering from problems in Houston, Texas. She has been studying trauma and forced migration for 15 years. "There's a different tension and fear in faces than I've seen before," she said.

initiate — v. to start something to happen

screening — n. a process of finding out information from a person for a purpose

vulnerable — adj. able to be hurt or influenced physically or emotionally

forensic — adj. related to the use of scientific knowledge to solve crimes