Update Required To play the media you will need to either update your browser to a recent version or update your Flash plugin.
By Bryan Lynn
05 January 2022


BlackBerry recently confirmed that as of January 4, 2022, it will no longer support the operating system for its once-popular devices. In its "end of life" announcement, the Canadian-based company said older BlackBerry devices would no longer work effectively for phone calls or data services.

The company did note that some BlackBerry devices using the Android operating system will still work. These include models launched from 2015 to 2018, starting with the BlackBerry Priv to the BlackBerry Evolve X. 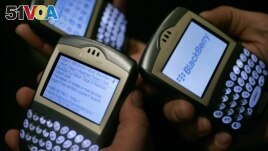 The decision to end BlackBerry support was first made public in September 2020. That is when company chief John Chen announced that BlackBerry had officially moved from being a device manufacturer to a software developer. The company, Chen said, was now centered on providing "security software and services to enterprises and governments around the world."

That decision followed years of struggles by the company to keep selling BlackBerry devices as competition intensified in the worldwide smartphone market. At the height of its popularity, the BlackBerry – with its built-in keyboard – enjoyed a huge market share of the mobile phone market.

The BlackBerry began to rise in 1999, eight years before Apple launched its first iPhone. At the time, the new BlackBerry 850 offered email, wireless data and a traditional keyboard. Demand for the new combination devices started to expand. They became especially popular with businesspeople and government officials.

BlackBerry kept adding services and launching new devices through the early 2000s. By 2010, the devices held a market share of more than 40 percent, internet data company Comscore reported at the time. The company was the leader in the smartphone market, above Apple, Google, Microsoft and Palm.

The ability of the BlackBerry to keep people connected at all hours even led to the term "crackberry." The term was used to describe the dependence and addictive nature of the devices for many individuals.

But over the next several years, BlackBerry began to experience major drops in sales. It was forced to repeatedly delay new product launches. By 2016, Comscore reported that BlackBerry's market share had shrunk to just 1 percent. At the time, Android-based phones had a share of about 53 percent, while Apple held 43 percent.

The smartphones offered by Android and Apple appealed to many users who favored the touchscreen designs and an unlimited number of apps.

The huge fall in popularity was noted in 2016 by one of the biggest fans of the BlackBerry, then-President Barack Obama. He pushed for the ability to keep his BlackBerry in the White House after his 2008 election. During his presidency, Obama spoke openly about his dependence on his BlackBerry device.

While speaking with American talk show host Jimmy Fallon in June 2016, Obama said, "I was this cool, high-tech guy when I got in... (the White House). And I was the first president to have a BlackBerry."

But he then added, "So years pass, and no one else has BlackBerries." Obama admitted that although he still loved the device and wanted to keep carrying it, he was advised to give it up for a new smartphone.

In recent years, Chinese electronics company TCL entered a partnership with BlackBerry that permitted it to manufacture and sell the latest BlackBerry-licensed devices. Those devices use the Android operating system.

In early 2020, an American startup company called OnwardMobility announced a plan to launch a 5G BlackBerry device powered by Android. The company's website states that the "new BlackBerry 5G smartphones" were expected to be available in 2021. The website provides no other details but offers interested parties the chance to sign up to stay informed.

Bryan Lynn wrote this story for VOA Learning English, based on reports from Reuters, Agence France-Presse and BlackBerry.

enterprise – n. a business or organization

keyboard – n. a set of keys on a computer that a user presses to make it work

addictive – adj. making a person want so much of something that they become dependent, or addicted to it

touchscreen – n. a computer or device screen that you touch to access information, buy something, etc.

app – n. a computer program that carries out a specific job, especially on a mobile device

license – v. give someone official permission to do or have something