Update Required To play the media you will need to either update your browser to a recent version or update your Flash plugin.
By VOA
04 December, 2014


If you have a young daughter, and you celebrate Christmas, there is a good chance that One Direction's latest album "Four" will be on your shopping list. The British boy band released the CD November 17th. Days later, it pushed Taylor Swift's album "1989" out of the number one position on Billboard Magazine's Top Two Hundred albums chart.

One Direction has been there before. In fact, each of the band's four albums has gone to number one in the first week of release. Billboard Magazine says One Direction is the only group in the history of the ratings chart to do that. Not true of all performers, however. Both singer Beyoncé and rapper DMX saw the same success with their first five albums.

Last week, One Direction won the top prize, Artist of the Year, at the 2014 American Music Awards. They were also named Favorite Group, and their record "Midnight Memories" won the Favorite Pop/Rock Album award. One Direction performed at the awards ceremony in Los Angeles. But the song it performed was "Night Changes" from the new album. 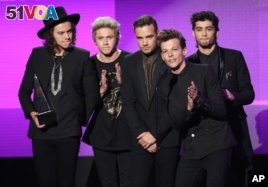 One Direction on stage at the American Music Awards November 23, 2014, in Los Angeles, California.

"Four" sold 387,000 copies in its first week. "Steal My Girl" was the first single from the collection. It came out in September. A humorous video was also released for "Steal My Girl." The video was shot in the desert and American actor Danny Devito plays the video director. Chimpanzees and other wild animals also perform.

One Direction had to deal with People for the Ethical Treatment of Animals because of that. The group protested the use of the animals. The band answered with a letter stating that no animals were hurt in the video production.

One Direction begins an international series of concerts in 2015 to support "Four." The tour is called "On the Road Again." The band has shows set for Europe, the Americas, Asia, Australia and Africa.

Are boy bands or girl bands popular in your country? Do you have a favorite? Let us know, and practice your English writing skills, in the Learning English comments section.