Update Required To play the media you will need to either update your browser to a recent version or update your Flash plugin.
By Dan Friedell
16 December, 2015

Cast of Star Wars in "a capella" video

Everyone is excited for the new Star Wars movie coming out on Thursday night. 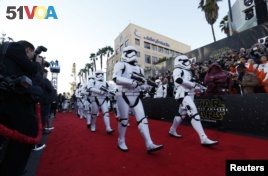 Storm Troopers march in at the world premiere of the film "Star Wars: The Force Awakens" in Hollywood.

The group teamed up with comedian Jimmy Fallon, the host of "The Tonight Show," to record an "a capella" using the music from Star Wars. An "a capella" performance means the singers are performing without being accompanied by instruments or recorded music.

Fallon's show is known for producing these amusing concerts with singers like Adele and Mariah Carey. The Star Wars actors, storm troopers and famous robots like R2-D2 joined Fallon and his band, the Roots, to sing "A long time ago in a galaxy far, far away..."

The Star Wars "a capella" received over 500,000 views during its first day on YouTube.

Not to be outdone, British comedian James Corden made his own video with the boy band One Direction.

Corden hosts "The Late Late Show," and is known for a routine called "Carpool Karaoke."

In the routine, Corden and a celebrity drive around Los Angeles singing along to songs on the car's radio.

In the past, Corden invited Justin Bieber, Stevie Wonder, Iggy Azalea and others to ride along.

On Tuesday's show, he asked the four members of One Direction to join him.

The hashtag DCarpoolKaraoke was the top trending item on Twitter during most of the day Wednesday.

There are only about 2,000 giant pandas in the world. The black-and-white creatures from China are one of the world's most famous endangered species.

The panda cub Bei Bei was born in August. His parents are Tian Tian and Mei Xiang.

After four months, he was introduced to the media on Wednesday. Bei Bei weighs about 8 kilograms.

The zoo showed Bei Bei to get people ready for the giant panda exhibit's re-opening next month.

If you can't wait until then to see the baby panda, check out this video.

Spiders in a hole

Halloween was back in October. But everyone has time for a scary video, right?

That's what one blogger for the TV channel "Animal Planet" must have thought when she posted a video Tuesday.

A video titled "Crazy Scary Spider Hole" has almost three million views on YouTube, and most of them came in the last couple days.

The video shows children investigating a hole in a rock wall.

And then one of the kids' fathers says "stand back, I'm going to pull them out" and reaches into a hole and pulls out a handful of insects that people call daddy longlegs.

People think they are like spiders and poisonous. But they are not. The mass of insects drops to the ground and scatters.

And the kids shriek with delight.

If you look at the video, we think you will, too.

What do you think of the video of One Direction singing along in the car? We want to hear from you. Write to us in the Comments Section or on 51VOA.COM.

karaoke – n. a form of entertainment in which a device plays the music of popular songs and people sing the words to the songs they choose

routine – n. a series of things (such as movements or jokes) that are repeated as part of a performance