One in Five Deaths Linked to Unhealthy Diet

Update Required To play the media you will need to either update your browser to a recent version or update your Flash plugin.
By John Russell
10 April, 2019

Those foods were partly to blame for heart disease, cancer and diabetes, a new study found.

The study is called the Global Burden of Disease. It followed eating trends in 195 countries from 1990 to 2017. The findings were reported in the publication The Lancet. 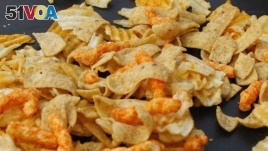 FILE - A mixture of salty snacks and chips is shown on a table in Pittsburgh's Market Square, Feb. 7, 2012.

The study found that Uzbekistan had the highest percentage of diet-related deaths.

Israel had the lowest proportion of diet-related deaths, while the United States rated 43rd in the study.

Consumption of foods such as nuts and seeds, milk and whole grains was on average too low, the researchers found.

Chris Murray is director of the Institute for Health Metrics and Evaluation at the University of Washington, which led the work.

"Poor diet is responsible for more deaths than any other risk factor in the world," he said.

The study also found that people drank more than 10 times the recommended amount of sugary drinks.

Another study published in January suggested an "ideal diet" for the health of people and the planet would include a doubling of the consumption of nuts, fruits, vegetables and legumes. Such a diet would also include reducing by half the amount of meat and sugar consumed.

Kate Kelland reported on this story for Reuters. John Russell adapted it for Learning English. George Grow was the editor.

trend – n. a general direction of change; a way of behaving that is developing and becoming more common

proportion – n. the relationship that exists between the size, number, or amount of two things — often + of

consumption – n. the act of eating food or using something

factor – n. something that helps produce or influence a result; one of the things that cause something to happen