One Man’s Plan to Save Honey Bees

Update Required To play the media you will need to either update your browser to a recent version or update your Flash plugin.
By John Russell
09 November, 2019


The loss of honey bee colonies is worrying experts across the United States. But a man in California thinks he has found an unusual way to save them.

Michael Thiele does something that he calls the "rewilding" of honeybees. He permits bees to live in natural log hives high above the ground, as they did for millions of years. 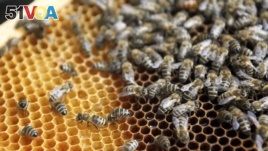 FILE - Bees are seen in a beehive on the roof of the cultural center Cankarjev Dom in Ljubljana August 6, 2011. (REUTERS/Srdjan Zivulovic)

Thiele, who is from Germany, talked to Reuters news agency about his idea. He says people "can do this very, very simple thing — return bees into their natural nest environment."

Thiele's method involves hollowing out logs and attaching them to tree trunks. He also sometimes hangs the hollow logs from the tops of barns or puts them on high wooden tables for a similar effect.

The logs then become appealing to bee "scouts" looking for a nest site. These "scouts" alert their bee colonies to move into it.

Thiele says his life with bees began with intense dreams he had about them 20 years ago. He said, "You know how it is after a very strong dream, you wake up and it stays with you."

He has been making the log hives since 2008. He says bees sometimes colonize them within days, and usually within a few weeks.

Why are honey bees important?

Honey bees are important because they pollinate plants that produce about a quarter of the food Americans eat.

Experts say the bee population is getting smaller because of climate change and other human-caused activities. We are building houses and cities on land where they live, and using chemicals that are killing them.

Last winter, U.S. beekeepers lost almost 40% of their colonies. That estimate comes from a report released this year by the Bee Informed Partnership, a group of people in the bee industry.

It was the worst winter die-off in more than a decade.

Thiele says the usual ways people raise honey bees are bad for their health. He rejects the white boxes that traditional beekeepers use. He also refuses to use chemicals, smoke or protective clothing when he works with bees. He touches them with his bare hands.

Thiele says his hives are both a way to save bees and a personal project.

While bees crawled over his hand and arm he said, "It feels so intimate and I feel how deeply we belong and how important it is to protect them."

He added that honey bees show how fragile life is. He added, "As if they are really mirroring where we are on this time on this planet."

Jane Ross reported on this story for Reuters. John Russell adapted it story for Learning English. Kelly Jean Kelly was the editor.

nest – n. a place where an animal or insect lives and usually lays eggs or takes care of its young

barn – n. a building on a farm that is used for storing grain and hay and for housing farm animals or equipment

scout – n. someone who searches an area or place for something or someone

pollinate – v. to give (a plant) pollen from another plant of the same kind so that seeds will be produced