Update Required To play the media you will need to either update your browser to a recent version or update your Flash plugin.
By Anna Matteo
27 February 2021

On today's program, we talk about an animal idiom. What do you think it means to be a one-trick pony? 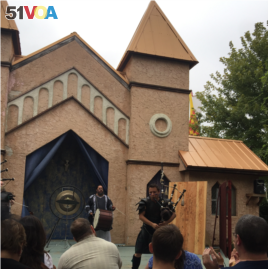 Let's start with a pony. That is a small horse. And one definition of a "trick" is a special act or skill. So, pony tricks can be fun to see. But who would want to watch a pony that does the same trick over and over?

So, for example, let's say you know a champion weightlifter. He is big and strong and successful in the sport. But it is the only thing he does: He eats, drinks, and sleeps weightlifting. You could truthfully tell him he is a one-trick pony. But, be prepared to run away as soon as the words leave your mouth. He probably won't be very happy.

Some word experts say the idiom "one-trick pony" comes from the circus. A circus pony that can only do one trick is not going to entertain a crowd for very long.

The term "one-trick pony" appeared around the turn of the twentieth century. Within about fifty years, the term had become an idiom. Note that one-trick is usually hyphenated. And if you have more than one, you have one-trick ponies.

Now, a one-trick pony usually describes a person. But sometimes it can describe other things, such as a company. If a company only does one thing such as make ice cream cones, it might be called a one-trick pony. However, that usage is less common.

Now, let's hear two friends use the expression in a conversation.

A: Guess who will perform at my outdoor party next week? Sam the Entertainer!

B: Please, not Sam the Entertainer! He's anything BUT entertaining.

A: What do you mean? He has such energy!

A: Sam is the best bagpipe player around.

B: But that's ALL he does. I hope your guests like loud bagpipe music.

A: I'm sure they'll love it! ! I've invited all my Ren-Fest friends!

Now, keep in mind that people who specialize in a certain area of their work are not called one-trick ponies. They are specialists. For example, I would never call a doctor specializing in children's illnesses a one-trick pony. She is a specialist and has many skills to do her job.

And we here at VOA Learning English specialize in using stories to teach English. But I hope you don't consider us one-trick ponies.

Until next time...I'm Anna Matteo.

insult – n. a rude or offensive act or statement : something that insults someone

champion – adj. first among all contestants or competitors

eats, drinks, and sleeps – idiom : to have a strong passion for something; to think about it constantly

circus – n. a traveling show that is often performed in a tent and that typically includes trained animals, clowns, acrobats, etc.

entertain – v. to perform for (an audience) : to provide amusement for (someone) by singing, acting, etc.

hyphenated – adj. containing or linked with a hyphen

conversation – n. a talk between two or more people : the act of talking

Ren-Fest – n. short for Renaissance Festival : A festival held to recreate the arts and history of the Renaissance. Generally held outside and on weekends and people usually dress up for it in period clothing.