Update Required To play the media you will need to either update your browser to a recent version or update your Flash plugin.
By VOA
08 January, 2015


We continue the story of "The Open Boat" by Stephen Crane. As we told you last week, the story is based on true events. In eighteen ninety-six, Crane was traveling to Cuba as a news reporter. On his way there, his ship sank in the Atlantic Ocean. Crane climbed into the last remaining lifeboat.

Three men got into the boat with him. They were the ship's captain, the cook and a sailor named Billie. For three days, the men steered the small boat through high waves along the coast of Florida. At last, they saw land. Here is Shep O'Neal with the final part of the story.

A long stretch of coast lay before the eyes of the men. Slowly, the land rose up out of the mountainous sea. The men could see a small house against the sky. To the south, they could see a lighthouse. Tide, wind and waves were pushing the lifeboat northward. The men thought someone on land would have seen the boat by now.

"Well," said the captain, "I suppose we'll have to attempt to reach the shore ourselves. If we stay out here too long, none of us will have the strength left to swim after the boat sinks."

So Billie the sailor turned the boat straight for the shore.

"If we don't all get ashore," said the captain, "I suppose you fellows know where to send news of my death?"

The men then exchanged some information. There was a great deal of anger in them. They thought: "If I am going to be drowned, why, in the name of the seven mad gods who rule the sea, was I permitted to come this far and think about sand and trees?"

The waves grew stronger. They seemed always just about to break and roll over the little boat. The coast was still far away. The sailor said: "Boys, the boat won't live three minutes more, and we're too far out to swim. Shall I take her to sea again, captain?"

"Yes! Go ahead!" said the captain. The sailor turned the boat and took her safely out to sea again. 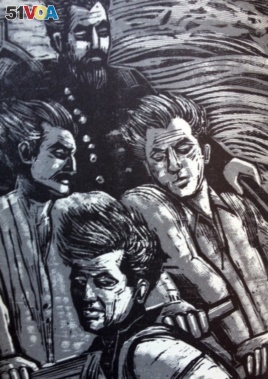 "It's funny those life-saving people haven't seen us," one of the men said.

Once more, the sailor rowed the boat and then the reporter rowed. Suddenly, they saw a man walking along the shore.

The man stopped walking. He moved his hand in the air to wave at them. He saw them! Now he was running to the house.

The captain tied a cloth to a stick and waved it. Now there was another man on the shore. The two men waved their hands in the air, as if they were saying hello to the men in the boat. 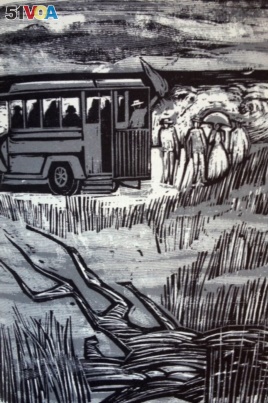 Now, what was that moving on the shore? It was a bus – a hotel bus. A man stood on the steps of the bus and waved his coat over his head. The men in the boat wondered what he wanted to say. Was he attempting to tell them something? Should they wait for help? Should they go north? Should they go south?

The men waited and waited but nothing happened. The sun began to go down. It got dark and cold. They could no longer see anyone on the beach.

The cook finally spoke: "Billie, what kind of pie do you like best?"

"Pie," said the sailor and the reporter angrily. "Don't talk about those things!"

"Well," said the cook, "I was just thinking about ham sandwiches, and ..."

A night on the sea in an open boat is a long night. The sailor continued to row until his head fell forward and sleep overpowered him. Then he asked the reporter to row for a while. They exchanged places so the sailor could sleep in the bottom of the boat with the cook and the captain.

The reporter thought that he was the one man afloat on all the oceans in the world. The wind had a sad voice as it came over the waves. 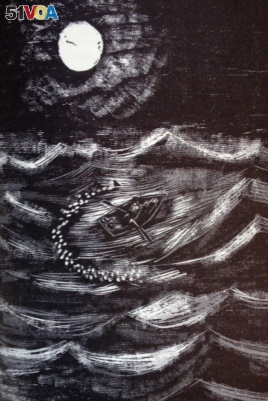 Suddenly, there was a long, loud swishing sound behind the boat and a shining trail of silvery blue. It might have been made by a huge knife. Then there was another swish and another long flash of bluish light, this time alongside the boat. The reporter saw a huge fin speed like a shadow through the water, leaving a long glowing trail. The thing kept swimming near the boat. He noted its speed and power. The reporter wished the men would wake up. He did not want to be alone with the shark.

The reporter thought as he rowed. He was angry that they had come so close to land and yet might still die at sea. Then he remembered a poem that he had learned as a child. It was a poem about a soldier of the French Foreign Legion. The soldier lay dying in Algiers. Just before he died, he cried out: "I shall never see my own, my native land." And now, many years after he had learned this poem, the reporter for the first time understood the sadness of the dying soldier.

Hours passed. The reporter asked the sailor to take the oars so that he could rest. It seemed like only a brief period, but it was more than an hour later, when the sailor returned the oars to the reporter. They both knew that only they could keep the boat from sinking. And so they rowed, hour after hour, through the night.

When day came, the four men saw land again. But there were no people on the shore. A conference was held on the boat.

"Well," said the captain, "if no help is coming, we might better try to reach the shore right away. If we stay out here much longer, we will be too weak to do anything for ourselves at all."

The others agreed. They began to turn the boat toward the beach. The captain told them to be careful – that when the boat came near the beach, the waves would sink it. Then everyone should jump out of the boat and swim to the shore.

As the boat came closer to land, the waves got bigger and more violent. At last, a large wave climbed into the air and fell on the small boat with great force.

The boat turned over as the men jumped into the sea. The water was like ice. The reporter was tired. But he swam toward the beach. He looked for his friends.

He saw Billie, the sailor, in front of him, swimming strongly and quickly. The cook was near him. Behind, the captain held on to the overturned boat with his one good hand. Soon, the reporter could swim no longer. A current was carrying him back out to sea. He thought: "Am I going to drown? Can it be possible?"

As the reporter got close to the boat, a large wave hit him and threw him into the air over the boat and far from it. When he tried to get up, he found that the water was not over his head, only half way up his body. But he was so tired that he could not stand up. Each wave threw him down, and the current kept pulling him back to sea.

In the shallow water, face down, lay Billie, the sailor.

The reporter did not know all that happened after that. He fell on the sand as if dropped from a housetop. It seems that immediately the beach was filled with men with blankets, clothes and whiskey. Women brought hot coffee. The people welcomed the men from the sea to the land. 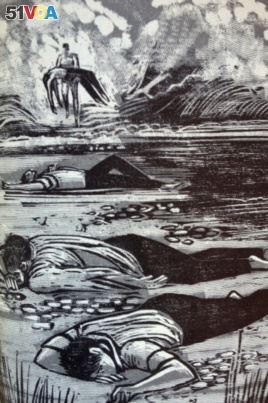 But a still and dripping shape was carried slowly up the beach. And the land's welcome for the sailor's body could only be its final resting place. When night came, the white waves moved in the moonlight. The wind brought the sound of the great sea's voice to the men on the shore.?

row - v. to move a boat through water using oars