Update Required To play the media you will need to either update your browser to a recent version or update your Flash plugin.
By VOA
10 August, 2015


In India, government efforts to reform the economy have slowed. The reason: the political opposition is blocking the passage of legislation through parliament.

Mr. Modi's government has refused to dismiss the ministers, saying the accusations have not been proven. 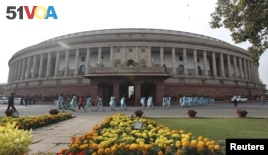 Opposition in Parliament, above, has slowed reform legislation supported by Prime Minister Narendra Modi. Although popular, Mr. Modi's party does not have a majority.

The dispute in parliament has almost ended the government's hopes of passing legislation related to tax reform and land purchases in the current term.

Dharmakirti Joshi is chief economist at the ratings agency Crisil in Mumbai. He says these two bills were the centerpiece of the government's promise to make India an easier place to do business.

"What is happening in respect to both the bills is that there is delay and dilution of content. If they don't get cleared, yes, it will be a hit to the sentiment and it will constraint growth going ahead," he said.

The tax reform bill is known as the Goods and Services Tax. It aims to create a single market across India. It would do this by replacing the many different taxes levied by individual states with a single sales tax.

The land bill would have made it easier for industry to acquire land to put up factories. However, those plans have also been delayed after the opposition denounced them as "anti-farmer."

Prime Minister Modi is having a difficult time passing laws because his government does not command a majority in the upper house of parliament.

Satish Misra studies Indian politics for the Observer Research Foundation in New Delhi. He blames the government for not doing enough to build ties with the opposition.

"They will have to take the opposition on board, only then things will start moving...the government is not willing to concede even an inch to the opposition."

The political impasse is affecting the Indian economy. In a recent report, Moody's said the disputes are hurting business confidence – how business leaders feel about current economic conditions. The credit ratings agency added that the government's failure to deliver promised reforms could slow growth.

Prime Minister Modi came to power last year on the promise of restoring momentum to a slowing economy. Growth has picked up, but the rate of change has been slower than expected from a man who many had hoped would change India's business climate.

Anjana Pasricha reported this story from New Delhi for VOANews.com. Mario Ritter adapted it for Learning English. George Grow was the editor.

centerpiece – n. the most important part of something

levied – v. the use of legal power to collect taxes

acquire – v. to come to own or have something

impasse – n. a situation where further progress is blocked

deliver – v. to take to a person or place

momentum – n. the strength of force something has when it is moving