Update Required To play the media you will need to either update your browser to a recent version or update your Flash plugin.
By John Russell
03 November, 2017


Since he was eight years old, Robert Salazar has been making artistic creations from folded paper.

Now, he is taking his love of origami to a different place: outer space. 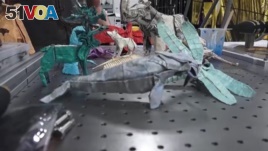 Salazar works with the Jet Propulsion Laboratory of the United States space agency NASA. He says that ideas from origami can help design devices for research and exploration:

"Origami offers the potential to take a very large structure, even a vast structure, and you can get it to fit within the rocket, go up, then deploy back out again. So it greatly magnifies what we are capable of building in space."

Manan Arya is a technologist at the Jet Propulsion Laboratory. He is working on a project called Starshade. The project's goal is to fit a large object into a rocket. Once the rocket reaches the correct point in space, the Starshade opens like a flower. This large flower shape is meant to block light to permit a space telescope to better see areas close to bright stars.

Starshade, Arya says, can be used to look for planets that orbit other stars.

"Seeing an exoplanet next to its parent star is like trying to image a firefly next to a search light, the searchlight being the star. Starshade seeks to block out that starlight so you can image a really faint exoplanet right next to it."

Other uses: a Robot and an Antenna

Researchers are also using ideas from origami to design a robot and a special antenna for satellites.

The robot is called the Pop-up Flat Folding Explorer Robot, or PUFFER.

It can fold itself flat to get into small spaces. Salazar says the robot can explore environments "otherwise inaccessible" to a robot. It could even be used to explore cave systems on our own planet, he adds.

Arya notes that the idea behind the special antenna's design is to pack it into very small satellites that are known as CubeSats. Arya says it is very useful to be able to fit large antennas into a small space:

"The bigger the antenna you have, the more gain your antenna has, so it is useful to have a big antenna that gets packaged into this tiny space that unfolds out to be a large antenna. The biggest CubeSat antennas we have right now are about half a meter."

Elizabeth Lee reported on this story for VOA News. John Russell adapted it for Learning English. Mario Ritter was the editor.

origami – n. the Japanese art of folding paper into shapes that look like birds, animals, etc.

deploy –v. : to open up and spread out the parts of (something, such as a parachute)

exoplanet – n. a planet that orbits a star outside the solar system.

inaccessible – adj. difficult or impossible to reach, approach, or understand : not accessible

technologist – n. someone who is an expert in technology