Update Required To play the media you will need to either update your browser to a recent version or update your Flash plugin.
By Phil Dierking
10 September, 2018

She became the first Japanese player ever to win a Grand Slam title.

An overnight queen in Japan

Two days after the match, Osaka's victory is still front-page news and leading discussion on television programs in Japan.

Osaka was born in Osaka, Japan, to a Japanese mother and a Haitian-American father. The family moved to the United States when she was three.

She holds both Japanese and American citizenship. But she has chosen to compete for the Japanese Tennis Association. 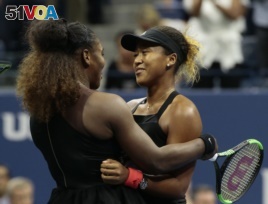 Osaka's victory and her respectful behavior have brought national pride to Japan. For now, it appears the country is ready to accept her as Japanese despite her mixed race, a complicated issue in Japan.

Japan's largest newspaper, Yomiuri, called Osaka a "new heroine that Japan is proud of." The newspaper described her appeal as being extremely strong on the tennis court, but innocent off the court.

Junko Okamoto wrote in the weekly magazine Toyokeizai that Osaka's shyness "makes her look more like a Japanese." Okamoto also said Osaka could become a face of the 2020 Tokyo Olympics.

In an interview Monday from New York on Japan's TBS television, Osaka was asked what she wants to do now. She replied in Japanese: "Have curried rice topped with a pork cutlet." Then in English she said: "I am very honored. I don't know how to say that in Japanese."

In the United States, much of the post-match discussion has centered on Serena Williams' controversial behavior during the final.

Early in the second set of the match, chair umpire Carlos Ramos called a violation against Williams for receiving coaching from her coach. That is against the rules during Grand Slam matches.

Williams argued the ruling. She said, "One thing I've never done is cheat, ever." She added, "I don't cheat to win. I'd rather lose."

During a break, Williams again told Ramos she had not gotten coaching and asked for him to apologize. She told Ramos he would never umpire one of her matches again. She then called the chair umpire a "thief" for stealing a point from her.

The third violation resulted in a game penalty. The penalty meant Williams lost one full game. It also put Osaka in an even better position to win the set and the match.

After losing the match, Williams said, "I'm here fighting for women's rights and women's equality. And for me to say 'thief' and for him to take a game, made me feel like it was a sexist remark."

Williams' supporters and some in the tennis world criticized the chair umpire's rulings, especially the game penalty.

Billie Jean King is a former top-ranked player and a women's rights activist. She wrote on Twitter in support of Williams.

"When a woman is emotional, she's "hysterical" and she's penalized for it. When a man does the same, he's "outspoken" & and there are no repercussions," King wrote.

Osaka said she did not know what was happening between Williams and the umpire.

After the match, the new U.S. Open champion said, "I'm always going to remember the Serena that I love."

Phil Dierking adapted the story for Learning English with additional reports from the Associated Press. Ashley Thompson was the editor.

complicated - adj. hard to understand, explain, or deal with

racquet - n.a piece of sports equipment that is used to hit a ball or other object in games like tennis, badminton, squash, etc.

umpire - n. a person who controls play and makes sure that players act according to the rules in a sports event (such as a baseball game or a cricket or tennis match)

repercussion - n. something usually bad or unpleasant that happens as a result of an action, statement, etc., and that usually affects people for a long time