Other, The Other and Another

Update Required To play the media you will need to either update your browser to a recent version or update your Flash plugin.
By VOA
14 March, 2019


It's springtime in Washington, D.C. and I'm so excited! There are a lot of places to enjoy nature, like the National Arboretum and Rock Creek Park.

Some spring days here are rainy. But other days are full of sunshine. The other day, it was sunny and beautiful. So, I walked to Rock Creek Park. And what did I see!? A blue heron. I took a picture but the bird was too far. So I ran closer and took another. Perfect.

You just heard me use the words other, the other and another.

As an English learner, you have probably used these words many times but may still be unsure if you are using them correctly.

In today's program, we will help clear up any uncertainty you may have.

Other, the other and another are used to talk about a person or thing that is additional or different. They can act as determiners or pronouns. 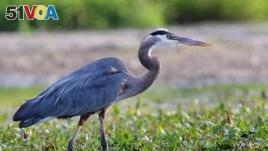 Blue herons are one of the most commonly seen animals in Rock Creek Park. They are tall with long legs and can reach a height of about 1.5 meters.

Determiners are words placed before nouns to show which person or thing is being referred to. For example, in "other days," the word other is the determiner and days is the noun.

English has more determiners. The words a, an, the, our, your, both and any are just a few examples.

Pronouns are words that are used instead of nouns or noun phrases. For instance, I said, "So I ran closer and took another." There, the word another acts as a pronoun and replaces the noun picture.

We'll begin with other.

The word other is indefinite. The simpler way to say that is it describes nouns in a non-specific way.

Other can mean "additional" or "different kinds of."

As a determiner, other can be used with noncount nouns and plural nouns. You may remember an earlier Everyday Grammar program on noncount nouns.

Here's other with the noncount noun luggage:

Do you have other luggage to check?

And here it is with the plural noun plans:

It is also very common to use the determiner other with the pronouns one and ones. When we do this, we must put an additional determiner before other.

Here it is with the pronoun one:

That picture's a little drab. I like that other one better.

And here it is with ones:

These are not the right keys. Could you look for the other ones?

Did you notice that none of the examples uses the plural form others? When it is a determiner, other never takes plural form.

Other can also act as a pronoun. For this use, the plural form, others, is more common, as in this example:

This shirt has a hole in it. Do you have others?

Now, let's talk about the other.

A minute or two ago, you heard an example that used this phrase.

The other is definite; it refers to specific people or things.

As a determiner, the other can be used with singular and plural nouns.

With singular nouns, it can mean the second of two choices, as in this example:

That green is a little drab. I like the other color better.

It can also mean the opposite direction or side, as in this:

My apartment is on the other side of D.C.

With a plural noun, the other refers to the remaining people or things, as in this:

Where are the other keys? These are not working.

The phrase the other can also act as a pronoun – singular or plural. Listen to two examples:

This hat looks better than the other.

Keep this copy of the script. I'll take the others.

With a plural noun, the phrase "the other" refers to the remaining people or things, as in, "Where are the other keys?"

Now, let's talk about another.

The word another is made from two words: an and other. The word an tells us that another is indefinite. It doesn't refer to specific person or thing.

Another can mean "one more" or "different from the first or other one."

It is always singular and we use it with singular nouns.

I'll take another cup of coffee, please.
Is there another gas station near here?

As a determiner, another is also commonly used with the singular pronoun one. Listen to a short exchange:

Would you like a second cup of coffee?
Sure, I'll have another one.

We can also use another as a pronoun.

You'll recognize the next exchange:

Would you like a second cup of coffee?
Sure, I'll have another.

Well, that was a lot of information! Visit our website for a few tips plus a practice exercise.

As a determiner, other does not take the plural form (no -s at end):

A determiner is needed before other when it is used with a singular noun:

When the noun is indefinite (unspecific), use another.

The an in another means "one." Another is always singular. Use it only with singular nouns:

Now, you try it! Choose one of these answers for each sentence: another, other, the other, others, the others. Write your answers in the comments section. Note: One of the sentences has two possible answers.

uncertainty – n. the quality or state of being doubtful

refer – v. to have a direct connection or relationship to something

phrase – n. a group of two or more words that express an idea but do not form a complete sentence

plural – adj. relating to a form of a word that refers to more than one person or thing

drab – adj. not bright or colorful

notice – n. to become aware of something by seeing or hearing it

singular – adj. relating to a form of a word that refers to one person or thing

script – n. the written form of a video, television show, play or something else

tip – n. a piece of advice or useful information