Outer Space Object Is a Cookie-shaped Part of a Planet

Update Required To play the media you will need to either update your browser to a recent version or update your Flash plugin.
By Jonathan Evans
23 March 2021


A new study says a mysterious, cookie-shaped object that entered our solar system likely broke off from a distant planet.

Arizona State University astronomers reported earlier this month that the strange 45-meter object appears to be made of frozen nitrogen.

The study's writers, Alan Jackson and Steven Desch, think a powerful force knocked a piece off an icy nitrogen-covered planet 500 million years ago. The piece was pushed out of its own star system toward ours. The reddish object is believed to be much different than its original self, with outer parts greatly affected by radiation and the sun. 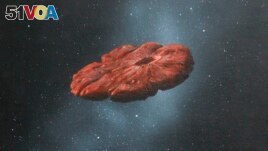 This 2018 illustration provided by William Hartmann and Michael Belton shows a depiction of the Oumuamua interstellar object as a pancake-shaped disk. A study published in March 2021 says the mystery object is likely a remnant of a Pluto-like world and shaped like a cookie.

The object is called Oumuamua, a Hawaiian word that means "messenger from afar." It is named for the observatory in Hawaii that discovered it in 2017.

Oumuamua was first seen as only a small bit of light millions of kilometers away. It was found to have come from beyond our solar system because its speed and path suggested it was not orbiting the sun or anything else.

The only other object confirmed to have come from another star system into our own is the comet 2I/Borisov, discovered in 2019.

Oumuamua looked like an asteroid but sped along like a comet. Unlike a comet, however, it did not have a visible tail. Scientists could not agree on whether it was an asteroid or a comet. Some even suggested it may have been linked to alien life.

"Everybody is interested in aliens, and it was inevitable that this first object outside the solar system would make people think of aliens," Desch said in a statement. "But it's important in science not to jump to conclusions."

Jackson and Desch created computer models that helped them find that Oumuamua was most likely a piece of nitrogen ice. They also found that the object was being slowly worn down over time.

Their two papers were published by the American Geophysical Union. They were also presented at the Lunar and Planetary Sciences Conference, which was held online earlier this year.

When Oumuamua was closest to Earth, it appeared to have a width six times larger than its thickness. That is about the same as one half of an Oreo cookie, Desch noted.

Oumuamua is now more than 3.2 billion kilometers away and too small to be seen, even by the Hubble Space Telescope. As a result, Jackson said, astronomers will need to depend on the original observations to continue studying it.

Desch noted that the object will continue to become thinner as it moves through space. He said in an email that by the time Oumuamua starts leaving our solar system around 2040, it will be "as flat as a pancake."

original – adj. existing since the beginning

asteroid – n. a space rock, either small or the size of a large moon, that orbits the sun

comet – n. an outer space object made of material like gas and ice which is left behind in its orbit as it approaches the sun

inevitable – adj. something that cannot be avoided or prevented

jump to conclusions – v. to guess the facts about a situation without having a lot of information

pancake – n. a thin, flat bread-like food that is cooked in a pan