Over 200 Whales Stuck on Beach in Australia

Update Required To play the media you will need to either update your browser to a recent version or update your Flash plugin.
By Dan Friedell
21 September 2022


About 230 whales beached themselves on the western part of the Australian island of Tasmania. It is the second such incident in recent days.

At least half are alive and animal officials are working to rescue them. They are also trying to understand why the whales got stuck.

The whales are stuck on Ocean Beach near Macquarie Harbor in the western part of Tasmania. Exactly two years ago, 470 whales became stuck on sand in the same area. That time, about 100 whales were saved but the rest died. 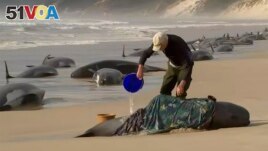 A rescuer pours water on one of stranded whales on Ocean Beach, near Strahan, Australia Wednesday, Sept. 21, 2022. (Australian Broadcasting Corporation via AP)

The whales are pilot whales, which weigh between 1,000 and 2,000 kilograms and measure over 6 meters. The International Whaling Commission says pilot whales are the species that most often is beached in large numbers. Some scientists believe it is because they travel in large groups and follow a leader.

Tasmania's Department of Natural Resources said a team from the Marine Conservation Program was heading to the area to help the whales.

The harbor does not have deep water and its entrance is known by locals as Hell's Gate.

Linton Kringle is a salmon farmer who helped with the rescue in 2020. He told the Australian Broadcasting Corporation this year's work would be more difficult.

That time, he said, the whales were in the harbor so people could reach them easily on boats. This time, they are outside of the safe area, on a beach, which means it will be harder to get boats near them.

"It's too shallow, way too rough. My thoughts would be try to get them onto a vehicle if we can't swim them out," Kringle added.

Vanessa Pirotta is a wildlife scientist who studies animals like whales and dolphins. She said the fact that the whales have gotten stuck around the same place during the same part of the year suggests "there might be something environmental here."

There was another incident of whales getting stuck in Tasmania on Monday. In the northern part of the island state, 14 sperm whales were found on King Island.

One scientist called that incident even more unusual than the pilot whales getting stuck.

Olaf Meynecke is a marine scientist at Griffith University in Australia. He said warmer ocean temperatures could be forcing the whales into different areas to look for food.

"When they do this, they are not in the best physical condition because they might be starving, so this can lead them to take more risks and maybe go closer to shore," Meynecke said.

beach –v. when a large ocean animal such as a whale comes out of the water and onto land and cannot return to the water

species –n. a group of animals that are similar and can produce young

shallow –adj. describing a small distance from the surface of the water to the bottom

shore –n. the land along an area of water