Update Required To play the media you will need to either update your browser to a recent version or update your Flash plugin.
By VOA
18 May, 2017


Not so long ago, the world's oceans were filled with different types of fish. Now, a large increase in global overfishing has threatened that supply.

According to the United Nations Food and Agriculture Organization, 90 percent of the world's fisheries are either being fully exploited, or are at risk of collapsing.

With fish supplies running out closer to home, fishermen are traveling further and further to find their catch. Frequently, fishermen are crossing over into other countries' territories, creating both political and environmental conflict.

Overfishing can be found everywhere, from Mexican fishing boats off the U.S. coast of Florida to Russian crabbing boats in the western Bering Sea.

However, the impact is felt the strongest in the South China Sea, where many countries have territorial claims.

Vietnam, Brunei, the Philippines, Taiwan, Malaysia, and China all consider parts of the sea as their territory. China makes the largest territorial claim and also has the largest presence in the area.

As fish supplies closer to its shores are depleted, the Chinese government is now helping fishermen crossing borders to find fish.

According to the Asia Maritime Transparency Initiative, Chinese Coast Guard boats have been patrolling near Luconia Shoals, off the coast of Malaysia, since 2013. The vessels were there to protect as many as 100 fishing boats from China.

Fishermen from Vietnam and the Philippines have accused China of preventing their fishing boats from entering the disputed waters. Some say they even try to ram their boats, or even come on board and take their equipment.

The Philippines has been in dispute with China over Scarborough Shoal and the surrounding waters. China has used its navy to keep Filipino fishermen out and encouraged its fishermen to catch in these waters.

An international court ruled for the Philippines last July in the territorial dispute but China rejected the ruling. Both countries, however, are expected to sign an agreement later this month on a joint use of these waters. 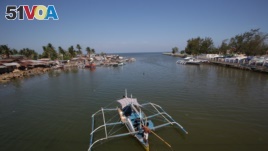 FILE - In this May 7, 2013 photo, a fishing boat returns to their village in the coastal town of Masinloc, Zambales province, northwestern Philippines.

Further south, Indonesia has also seized and destroyed over 300 fishing vessels, from Vietnam, Thailand and the Philippines, for illegal fishing in its waters the past three years.

Overfishing does not stop in East Asia either.

On the other side of the world, West Africa is now seeing damaging effects of overfishing.

Rashid Sumaila is the Director of Fisheries Economic Research at the University of British Columbia. He says communities that depend on fish for income and food, like Senegal, are now at risk.

According to Sumaila, China is not the only country to increase fishing off the African coast.

"Europeans have been fishing in these waters for a long time, too. Recently the European Union has been supporting European vessels to come over and fish," Sumaila said.

For many Senegalese, Sumaila says fishing is “the only thing they can do, because of the lack of education and skills to work in other sectors.”

About 260 million people draw some income from fisheries worldwide and most of these jobs are in developing countries.

Sumaila adds that if these jobs go away, and young people don't have any other work to turn to, the chance for frustration and social unrest grows. And some are forced to immigrate to other countries to find work.

Impact on the environment

Overfishing eliminates many of the big, high-value fish and removes a food source for other fish and animals. If left alone, Sumaila says, nature knows how to balance this. But as more fish are caught more frequently, it doesn't leave time for the population to stabilize.

Another concern is habitat destruction.

Bottom trawler boats, which drag nets along the ocean floor, are damaging coral reefs, which are important habitats for fish.

In the South China Sea, China is also building man-made islands to claim territories in disputed waters. The construction of these islands has been very harmful to the coral reefs.

John McManus is a marine ecologist and reef expert at the University of Miami. He says, “When you’re in a situation where you’re overfished and on the verge of fishery collapse, you don’t want to go destroying fish generating machines, and that’s what coral reefs can be seen as.”

Sumaila compares the action to taking away the home and the living space for fish in the ocean.

Phil Dierking reported this story for VOA Learning English. Hai Do was the editor.

How much do you depend on fish or the fishing industry? We want to hear from you. Write to us in the Comments Section or on 51VOA.COM.

exploit - v. to get value or use from

man-made - adj. made by people rather than by nature