Update Required To play the media you will need to either update your browser to a recent version or update your Flash plugin.
By John Russell
20 October, 2017

His store sells sandwiches, coffee, beer, cigarettes and other products.

El-Gamasy, an Egyptian-American, is known as "Timmy" to his customers. But to people thousands of kilometers east of New York, he is considered someone knowledgeable about United States foreign policy and the Middle East. He has spoken about those and other subjects on Egyptian television. 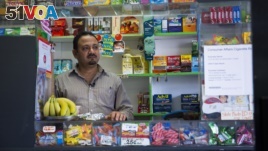 Hatem El-Gamasy works behind the counter at Lotus Deli in Queens, New York, where he sometimes stays until 2 a.m. or later.

El-Gamasy worked as an English teacher in Egypt before moving to the U.S. nearly 20 years ago. He attended Teaching English as a Second Language classes at St. John's University in New York.

He started working at an eatery to pay for his studies, food and housing. Eventually, he got married and bought his own store.

Over the years, El-Gamasy had written opinion pieces. But Egyptian broadcasters generally ignored his commentaries.

That changed last year. Many experts thought Hillary Clinton would become the next U.S. president. But El-Gamasy predicted that Donald Trump would win the presidential election.

Nile TV, an Egyptian television station, heard about the prediction and spoke with El-Gamasy. After the interview, other broadcasters and news agencies began to contact him.

In September, The New York Times newspaper published a story on El-Gamasy. It provided details of his day job to the whole world.

Some internet discussion boards described his experience as an example of the "American Dream" – the idea that hard work leads to good things.

But news operations and social media forums across the Middle East were critical of El-Gamasy. They questioned his credibility.

In the month since The Times' story, Egyptian TV stations that used his commentary the most – CBC eXtra News, ONtvLIVE, and Nile News – stopped calling.

"Oh, the political analyst Mr. Gamasy is just a sandwich guy; he's a pancake guy; he's this and this, nothing else," El-Gamasy said. "As if owning a small business is something I should be ashamed of ... I have nothing to regret."

When he's not working at his store or discussing politics, El-Gamasy spends hours working on his poetry and short stories. He recently published a book in English.

El-Gamasy says one of his favorite books is Paulo Coelho's The Alchemist.

"It [the Alchemist] teaches you, like, If you have a dream, don't give up on it. You need to pursue that dream."

"Politics is like a running river," he said. "Nothing stops."

Whether more opportunities arise or not, El-Gamasy says he has already found success as a small business owner "in one of the greatest cities" on earth.

Ramon Taylor reported on this story for VOANews. John Russell adapted his report for Learning English. George Grow was the editor.

discussion board – n. a public computer system on the Internet that lets people read and leave messages for other users (also called message board)

customer – n. someone who purchases a product or service

interview – n. a meeting at which people talk to each other in order to get information

sandwich – n. two pieces of bred with something between them