Update Required To play the media you will need to either update your browser to a recent version or update your Flash plugin.
By Alice Bryant
26 June, 2018


In June, the Oxford English Dictionary, or OED, added about 1,000 words and new definitions to its website. The changes are to help users understand a mix of terms, some dating back many centuries. The additions include words such as "brencheese" "deathshildy" and "hip-pop."

The new entries are part of the company's update to Oed.com, its searchable online dictionary for paid members. The OED makes changes to the website four times each year.

But the latest print version has been in process since the year 2000, and may not be ready for 10 more years. That information comes from Katherine Connor Martin, who heads the company's dictionary operations in the United States.

Usually, the OED watches usage of a word for at least 10 years before deciding whether to add a new entry, new definition or word related to an existing entry, she said. This general rule, however, is sometimes not followed. That is what happened with "tweet," a word that the OED added far before the 10-year mark. 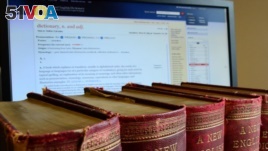 This undated image released by the Oxford English Dictionary (OED) shows old volumes of the dictionary next to a computer monitor displaying a page from the OED website. The OED has added about 1,000 new entries.

Other times, the company adds words that are very old, but were not included in the dictionary in the past.

"It's funny because we talk about new words, but many of the words we add are already obsolete. It's just that they were never in the dictionary before," Martin told the Associated Press.

That is the reality, she said, of a historical dictionary trying to put more than 1,000 years of English into books that already have over 855,000 entries. So, you get "brencheese," a rarely used term for when bread and cheese are eaten together. The word dates back to the year 1665. The word "deathshildy" is from Old English. It means someone who is guilty of a serious crime and condemned to death.

Here are a few other new entries:

"Imposter syndrome" dates to 1982 when Vogue magazine published a story about women who suffered from "impostor phenomenon." Psychologists use this expression usually when talking to patients about their employment and the workplace. "Imposter phenomenon" means the "inability to believe that one's success is justified or has been achieved as a result of one's own efforts or skills."

Changing ideas about human sexuality and relationships resulted in the words "heteromantic," "biromantic," "aromantic" and "homoromantic," Martin noted. "People have begun to self-identify as asexual, but they may still have romantic feelings short of actual sex," she said. Before, there was no word to describe this. A person who identifies as asexual does not desire sex but can still want a romantic relationship that does not involve sex. But, if they do not want sex or romance of any kind, they are both asexual and aromantic, Martin added.

The word "homophily" is similar in meaning to the expressions "birds of a feather flock together" and "like attracts like." The OED defines homophily as a way of behaving in which people seek those they believe to be most like themselves. It shows society's growing resistance to having ties with people of dissimilar opinions. The dictionary found that "homophily" was first used in a 1953 article published in a sociological journal. The more general definition is "similarities between individuals or groups."

Leanne Italie wrote this story for the Associated Press. Alice Bryant adapted it for Learning English. George Grow was the editor.

dictionary – n. a reference book that lists words and gives information about theirs meanings, forms and pronunciations

print – v. to use a machine to produce books, newspapers or magazines

obsolete – adj. no longer used because something newer exists

binge-watch – v. to watch more than one part of a television show or other program back-to-back

spoiler alert – n. a warning that an important detail of the plot development (about a film, TV show or book) will be revealed

microagression – n. a statement, action, or incident regarded as indirect or unplanned discrimination against members of a group such as a racial or ethnic minority

achieve – v. to successfully carry out

psychologist – n. an expert in the study of the mind and behavior

romantic – adj. of or relating to love between two people