Update Required To play the media you will need to either update your browser to a recent version or update your Flash plugin.
By Dan Friedell
10 June 2021


Have you ever seen an "ugly" oyster?

That is the term oyster farmers use for the sea animals when their shells get too large to sell to seafood restaurants.

Each year, farmers grow oysters to just the right size so people at restaurants will enjoy eating them. If they get too big, restaurants no longer want to buy them.

So last year, when many seafood restaurants in the U.S. closed due to the COVID-19 pandemic, oyster farmers lost the chance to sell their product.

Suddenly, they had a lot of "uglies" and nothing to do with them.

That was a big problem until a conservation program came to the rescue.

The program is called Supporting Oyster Aquaculture and Restoration, or SOAR. It is buying more than 5 million oysters at the cost of about $2 million from farmers on the east coast of the U.S. and in Washington State.

Farmers take living oysters that are too big to sell and send them to places like the Great Bay in the northeastern state of New Hampshire. 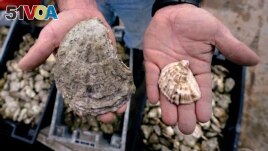 The difference between a standard oyster, and an 'ugly' oyster. (AP Photo/Charles Krupa)

Oysters are placed in the water in special locations called reefs. Once they attach to the structures in the water they can live for a number of years. They help create a good environment for other sea life.

The hope is that the oysters will help clean the water and also have babies.

Chris Burtis is an oyster farmer in the state of Maine. He called the program "kind of a lifesaver."

She said the program helped her business get through the pandemic and "stay afloat."

An unknown person donated money to the program, which was organized by the Pew Charitable Trusts and the Nature Conservancy. The groups worked together with the U.S. Department of Agriculture and the National Oceanic and Atmospheric Administration, which ran similar programs in other parts of the U.S.

Calvo started her farm about 20 years ago. She sells her oysters to restaurants close to Philadelphia, Pennsylvania, and those in the towns along the ocean in New Jersey. Oysters are ready to sell when they are about two years old. When all the restaurants started closing, she said she was "in a panic."

"Basically, you know, all my eggs were in that restaurant basket."

She was able to earn about half the usual amount of money by selling her oysters to the program. That was better than nothing.

The program helped her pay her employees and get ready for the next oyster season. The money allowed her to grow oysters that she could sell this year when prices returned to normal.

She said working to keep the large oysters healthy when they could not be sold would have hurt her business. And she could not give up on the young oysters, either.

"It wasn't like I could just walk away from the farm, because there's so much intensive labor, particularly during the spring and summer as the oysters are growing rapidly. You can't just walk away from an oyster farm and come back when the market's good again."

Calvo is not just an oyster farmer. Before she started her farm, she studied ocean science. She said the program should restore the reefs and help oysters and other sea animals. Oysters can live for five to six years, so they will produce young oysters for many more years. That is important. The Nature Conservancy says there are 85 percent fewer oyster reefs than in the past due to disease, pollution and overfishing.

Similar, smaller programs were successful in the past in the ocean off the coast of New Hampshire.

Raymond Grizzle is a professor at the University of New Hampshire. He studies oysters. He said the project is a good experiment.

"We are hoping for the best. It's almost a sure thing ... that they are going to do some good," he said.

Calvo said the program helped her during a bad time, but the business lessons she learned during the pandemic should help her in the future.

Now, she is able to sell oysters directly to customers who come to her farm. She also sells items from other producers in her area.

"I almost wish I had planted more oysters last year," she said. "Right now, the restaurants haven't even fully opened yet and they're already ordering more oysters than they ever have."

Michael Casey wrote this story for The Associated Press. Dan Friedell adapted it for Learning English and conducted the interview with Calvo. Susan Shand was the editor.

What do you think about restoring the oyster habitat? Do you enjoy eating them? Tell us in the Comments Section and visit 51VOA.COM.

ugly - adj. unpleasant to look at : not pretty or attractive

oyster –n. a type of shellfish that has a rough shell with two parts and that is eaten both cooked and raw

reef- n. a long line of rocks or coral or a high area of sand near the surface of the water in the ocean

lifesaver –n. something or someone which provides help that is badly needed

afloat –adj. something or someone which provides help that is badly needed

panic –n. a state or feeling of extreme fear

eggs in one basket –saying - If you risk all you have on the success or failure of one thing (such as an investment), so that if something goes wrong you could lose everything.

particularly –adv. used to indicate someone or something that deserves special mention