Update Required To play the media you will need to either update your browser to a recent version or update your Flash plugin.
By Dan Friedell
19 April, 2016


After their small boat turned over, three men swam to a small island in the Pacific Ocean. They used the leaves and branches of palm trees to spell the word HELP hoping someone could see them.

Just like in a movie, a U.S. Navy airplane spotted the castaways on a small island in Micronesia a week later. The island is close to Guam, a U.S. territory in the Pacific.

The flight crew searching for the men used a camera that can read heat signals to discover that they might be on the island. The men had started a fire, hoping to be found. 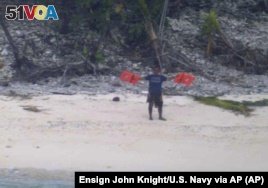 This photo provided by U.S. Navy released Thursday, April 7, 2016, shows a man waving a life jacket as a U.S. Navy P-8A maritime surveillance aircraft discovers them on the uninhabited island of Fanadik.

The pilot flew around the island and discovered the word spelled on the beach.

When the plane was close enough, the men ran out from some trees and started waving their orange life vests.

The plane flew close to the ground more than once, and tipped its wings to show the men it knew they were there. The crew also threw a smoke signal into the water.

The Navy airplane reported the castaways' location to the U.S Coast Guard and a boat from a nearby island left to pick the men up.

Lieutenant Commander John Harkins said he and his crew celebrated when they found the men, because they did not think they would find them.

The Associated Press news service reports the men arrived home safely and were not injured.

Dan Friedell wrote this story for Learning English based on reporting by the Associated Press. Hai Do was the editor.

What would you do if you were stranded on a small island in the Pacific Ocean? Write to us in the Comments Section or on 51VOA.COM.

castaway –n. a person who is left alone in a place (such as an island) as a result of a storm, shipwreck, etc.