Update Required To play the media you will need to either update your browser to a recent version or update your Flash plugin.
By Mario Ritter
05 February, 2016


Representatives of 12 countries have signed a major free trade agreement for East Asia and the Pacific.

The Trans-Pacific Partnership (TPP) was officially signed at a ceremony Thursday in Auckland, New Zealand. News media released pictures of some ministers rubbing noses. For native New Zealanders, rubbing noses is a sign of good will.

The nations that make up the TPP are responsible for 40 percent of the world's economy. They include Australia, Brunei, Canada, Chile, Japan and Malaysia. The other nations are Mexico, New Zealand, Peru, Singapore, Vietnam and the United States. 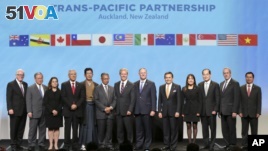 Trade representatives from the 12 member nations gather in Auckland, New Zealand for the formal signing of the Trans-Pacific Partnership Agreement.

In a statement, U.S. President Barack Obama called the agreement a forward-looking trade deal that sets new, high ideals for trade and investment. He said the pact suspends thousands of taxes and supports a free and open Internet. Obama said it also prevents unfair laws that restrict the free flow of information. And, he added, that it includes strong words in support of fair labor policies and environmental protection.

But the signing ceremony was, in some ways, only the beginning of a new process. The 12 nations have two years to ratify or reject the agreement.

The United States Congress passed trade promotion authority for the president in June 2015. It requires Congress to either approve or reject trade agreements without adding to or amending them.

However, Congress has yet to consider the huge free trade agreement. It also will take some time to study the thousands of pages in the agreement.

Michael Froman is the U.S. Trade Representative. He says his office will work to persuade members of Congress that the deal should be passed. He says the estimated increase to exports for the U.S. will be $350 billion a year.

The TPP is designed to cut tariffs, or import taxes, that free trade supporters say are barriers to trade. Without these barriers, supporters say, more goods and services will flow across borders, increasing trade and economic activity.

Gary Hufbauer is with the Peterson Institute for International Economics. He told VOA that, while tariffs will eventually be dropped, that will not happen immediately.

"..The barriers, the tariffs, in the case of goods, do not go to zero immediately. That takes some year, maybe about 10 years, depending on the product."

Labor groups in the United States, however, oppose the TPP. They are concerned that low-cost imports will flood the U.S. market. This would drive prices down and limit the wages that American employers pay their workers.

It remains to be seen when the TPP agreement will be voted on in the Senate. Gary Hufbauer says if the deal is not brought to a vote by July, the agreement might be voted on after a new U.S. president takes office next year.

Victor Beattie and Mil Arcega reported on this story for VOANews. Mario Ritter adapted it for Learning English. George Grow was the editor.

pact – n. a formal agreement between countries, people or groups

ratify – v. to make an agreement or treaty official by signing it or voting for it