Update Required To play the media you will need to either update your browser to a recent version or update your Flash plugin.
By Christopher Jones-Cruise
31 March, 2016


Police and security forces have arrested more than 200 suspected Islamist militants after a suicide bombing in Lahore on Sunday.

The attack took place at a crowded public park in the capital of Punjab, the most populous province of the country. At least 72 people, many of them Christians celebrating Easter, were killed.

Twenty-nine children were among the dead. More than 300 people were wounded. 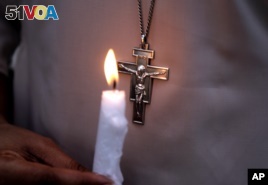 A Pakistani nun holds a candle during a vigil for victims of Sunday's deadly suicide bombing in a park, March 28, 2016 in Lahore, Pakistan.

Tuesday, the provincial law minister told reporters that more than 5,000 people were detained. He said they later released all but 216 people. Police and special counter-terrorism units have taken part in many raids across Punjab.

Jammaatul Ahrar, a group that once was part of the Pakistani Taliban, claimed responsibility for the bombing. It said the suicide attacker targeted Christians. A spokesman promised that the group would carry out more attacks in Punjab.

The threat caused officials to temporarily close all of the public parks in the province. The spokesman also threatened to attack local media.

"Everyone will get their turn in this war, especially the slave Pakistani media. We are just waiting for the appropriate time," the spokesman said on the social networking site Twitter.

The Easter Sunday bombing was the deadliest attack in Pakistan since a raid by militants on a school in Peshawar in December 2014. Almost 150 people were killed, most of them children.

The Pakistani Taliban and groups linked to it have attacked the government for more than 10 years. Tens of thousands of people have been killed in the attacks.

Reporter Ayaz Gul in Islamabad wrote this story for VOANews. Christopher Jones-Cruise adapted it for Learning English. Kathleen Struck was the editor.

Easter - n. religious holiday when Christians celebrate the return of Jesus after his execution

appropriate - adj. right for some purpose or situation