Update Required To play the media you will need to either update your browser to a recent version or update your Flash plugin.
By VOA
29 January, 2014

Pakistani officials have announced plans to name a school and a sports center for student who stopped a suicide bomber. The actions of 15-year-old, Aitzaz Hassan saved hundreds of other students in his high school earlier this month. The school is in Khyber Pakhtunkhawa province. The area is home to many Shi'ite Muslims. 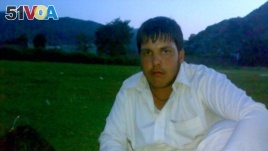 Aitzaz, a 15-year-old-boy who stopped a suicide bomber from entering his classroom.

Provincial Governor Shaukatullah Khan visited the home of the boy, and place flowers at his burial-place. The official announced an award of about five million rupees, or about 47,000 American dollars for the family.

Governor Khan told VOA that the sacrifice of children like Aitzaz Hassan is a cause for national pride, and a great honor for his village. The Governor said he came to the village representing Pakistan’s prime minister and president.

Prime minister Nawaz Sharif had declared earlier that the student should be honored with the nation’s highest award for bravery.

He proposed the award to president Mamnoon Hussain who has the power to approve it. The honor reportedly is expected to be presented to the boy’s family on March 23, which is Pakistan’s National Day.

Aitzaz Hassan was a ninth grader at the high school. Police said he saw the bomber moving toward the school’s entrance. The attacker was said to be wearing official school clothes, but looks suspicious to Aitzaz who tried to stop him. That is when a bomb on the attacker’s clothing exploded. The bomber was killed and Aitzaz died later in a hospital.

Aitzaz’s father said his mother was crying, but 500 other mothers would be crying, have the boy not acted as he did.

Pakistani education activist Malala Yusafzai expressed deep regret about the death of Aitzaz Hassan. She spoke from Britain, where she now lives.

She said "I feel proud that I belong to a country where many brave and courageous people like Aitzaz Hasan are born."

Malala Yusafzai now 16, survived an attempt on her life in 2012. Pakistani Taliban gunman carried out the attack in the Swat district of Khyber Pakhtunkhawa. Malala has gained worldwide attention for her opposition to militants and support for the rights of women and girls.

From Learning English, that’s the Education Report. For more reports about education, go to our website at 51voa.com. I’m Jerilyn Watson.