Update Required To play the media you will need to either update your browser to a recent version or update your Flash plugin.
By Jim Dresbach
27 September, 2016

Human Rights Watch said Pakistan's police system dates back to British colonial rule. It said the system is filled with "disgruntled" and "corrupt" officers who abuse suspects without facing punishment for their actions.

Human Rights Watch said it documented police abuses in three of Pakistan's four provinces. The abuses include torture, arrest and detention of suspects without a court order, extrajudicial killings and other abuse of detainees. The arrests and detentions sometimes resulted in the deaths of suspects, the group reported on Monday. 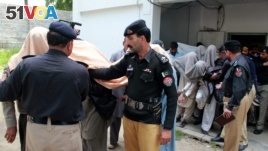 Pakistani police officers escort members of a local tribal council, with their faces covered outside a court in Abbottabad, Pakistan, May 5, 2016.

The report said that police forces in Punjab, Baluchistan and Sindh faced "improper pressure" from politicians and local community leaders. For years, governments failed to carry out reforms or hold police responsible for abuse, it noted.

Human Rights Watch said families of victims are failing to report police abuse because of fear of being threatened or falsely accused in other cases.

"Those from ... groups [like] refugees, the poor, religious minorities, and the landless — are at particular risk of violent police abuse," said the 102-page report.

The report is based on statements by police officers, victims of police abuses, their families, experts, activists and witnesses to police abuses.

Human Rights Watch called on Pakistan to improve working conditions and job-related awards for police officers. It said the police force is "under-resourced and under-equipped," noting officers are not trained in methods of professional investigation and forensic studies. It said this lack of training leads to officers unlawfully forcing suspects to provide information or admit guilt.

"Custodial torture remained one of the gravest and most pressing human rights issues in Pakistan," noted the independent Human Rights Commission of Pakistan in a report.

Critics say that Pakistani politicians use the police to suppress opponents in an effort to stay in power. They say this has effectively persuaded governments from enacting reforms and punishing abusive police officers.

Ayaz Gul wrote this story for VOANews. Jim Dresbach adapted his report for Learning English. George Grow was the editor.

extrajudicial – adj. done in violation of the law