Update Required To play the media you will need to either update your browser to a recent version or update your Flash plugin.
By Susan Shand
05 September, 2018

Khan said he hoped he could reset relations with the United States. He spoke just a few days after the U.S. government suspended aid to Pakistan over its reported failure to fight militants. 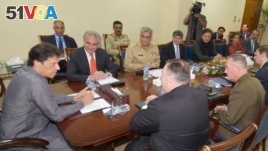 "A sportsman always is an optimist," he added. "He steps on the field and he thinks he's going to win."

Pompeo was in Pakistan for only four hours on his first visit to the country.

At the airport before leaving for India, the U.S. official said he was "hopeful" that the two sides could move forward.

"We've still got a long way to go, lots more discussion to be had," he said, adding it was time for the countries to carry out their joint agreements.

The new government gives the two sides a chance to continue discussing economic, business and other issues, Pompeo said. He said that they spoke about the need for a peaceful resolution in Afghanistan that is good for everyone, including the Pakistanis.

"I'm hopeful that the foundation that we laid today will set the conditions for continued success as we start to move forward," he said before leaving for India.

Last weekend, the United States canceled a $300 million Coalition Support Fund payment to Pakistan. The U.S. government said Pakistan was not doing enough to defeat the Taliban and other militants who attack Afghan and U.S. forces across the border.

Pakistan has rejected those claims. Pakistani officials say their country has been a major player in the U.S.-led campaign against militants. It was launched after al-Qaida attacked U.S. targets on September 11, 2001.

Flying to Pakistan, Pompeo announced his appointment of Zalmay Khalilzad as the new U.S. special adviser on re-building Afghanistan. Khalilzad, a long-time diplomat, is not well-liked in Pakistan. He "has been very critical of Pakistan in the past and his appointment will not help move things forward," said Zahid Hussain, an expert on militancy in South Asia.

Khalilzad was born in Afghanistan. From 2001-2003, he served as U.S. special envoy to the country following the collapse of the Taliban. In 2003-2005, he was the U.S. ambassador to Afghanistan.

He often blames Afghanistan's lack of security and other problems on Pakistan's military and ISI intelligence agency. He has accused them of helping Taliban forces.

Neither the United States nor Pakistan can afford a full break in relations, Hussain said. He added that Pakistan is angered that the relationship has been reduced to a single issue: Afghanistan.

As an opposition leader, Khan often criticized Pakistan's use of U.S. financial assistance. He briefly stopped trucks supplying fuel and other goods to U.S. and NATO troops from crossing into Afghanistan. He did this to protest U.S. drone strikes in Pakistan's tribal areas along the border.

In a speech following the July 25 elections, Khan said Pakistan would not take part in the U.S. war on terror. He has called for a peaceful end to the Afghan conflict.

cricket – n. a British sport played with ball and a bat

envoy - n. a person who is sent by one government to represent it in dealing with another government

foundation – n. the base on which something lies

afford – v. being able to provide the cost of something