Update Required To play the media you will need to either update your browser to a recent version or update your Flash plugin.
By Jim Dresbach
13 January, 2016


At least 14 people were killed Wednesday when a bomb tore through a polio vaccination center in southwestern Pakistan.

The New York Times reported that 13 of the dead were police officers at the site in Quetta. Authorities said 23 people were wounded. Area doctors told reporters that five of the wounded are in critical condition.

The police officers guard the health workers at the clinic. The health staff are often targeted by Islamist militants in Pakistan, according to the New York Times. 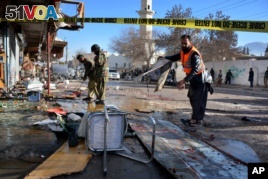 Pakistani security officials examine at the site of suicide bombing in Quetta, Pakistan, Wednesday, Jan. 13, 2016. The suicide attack on a polio vaccination center in southwestern Pakistan killed more than a dozen people and wounded many.

A senior Pakistani police officer told reporters that the suicide bomber had at least seven kilograms of explosives strapped to his body. The bomber walked into a group of security forces and health workers, and detonated the device.

The incident happened during a three-day immunization campaign to eliminate polio from Pakistan.

Such immunization campaigns meet resistance. Religious groups see the anti-polio campaign as a Western conspiracy to sterilize Muslims. Islamist militants suspect that the health centers are homes for espionage.

At least 80 people have been killed in related immunization center attacks since 2012.

Despite the attacks, 2015 saw a big drop in polio cases in Pakistan. Health officials said the country saw an 84 percent decline in polio cases last year.

Ayaz Gul wrote this story for VOAnews. Jim Dresbach adapted it for Learning English. Kathleen Struck was the editor.

What do you think about this bombing at the Polio immunization facility in Pakistan? We want to hear from you. Write to us in the Comments Section or visit our 51VOA.COM.

polio – n. a serious disease that affects the nerves of the spine and often makes a person permanently unable to move particular muscles

insurgency – n. a usually violent attempt to take control of a government

conspiracy – n. the act of secretly planning to do something that is harmful or illegal

sterilize – v. to make someone unable to produce children