Update Required To play the media you will need to either update your browser to a recent version or update your Flash plugin.
By Dan Friedell
19 October, 2016

People on social media are reacting to photographs of a blue-eyed tea seller from Pakistan.

Photographer Jiah Ali was carrying her camera when she discovered the man working at a market in Islamabad. 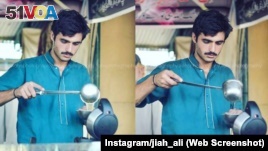 Arshad Khan is known around the world after a photographer posted a photo of him making tea in Pakistan.

Ali had no idea he would become an internet sensation when she placed the photo on Instagram earlier this week.

The young man has light blue eyes, dark hair and even a little facial hair. He captivated social media users, first in Pakistan and then around the world.

People wanted to know who he was and where they could find him.

They called him "chaiwalla." The name means someone who makes tea in Pakistan.

In the past 24 hours, the hashtag #chaiwalla with two different spellings trended in Pakistan.

Ali's photo of the good-looking man has thousands of likes and views.

Once the photo went viral, she went back to the market in search of the young man. It turns out his name is Arshad Khan. He is 18 years old and reportedly has 17 brothers and sisters.

Television cameras followed, and many women went to the market just to get a look at him.

People asked if he wanted to model clothing or get an acting job in movies or television.

As it so happens, he already said yes to one offer. A clothing company in Islamabad has offered to pay him to wear some of its clothes.

The story recalls another photograph that also went viral.

Jeremy Meeks caused a sensation in 2014 when a California police department posted a photo of him on the Internet after he was arrested. Many people said Meeks was handsome, too.

He signed a contract with a modeling agency while he was in jail. Some of his first photos came out in June.

What do you think of the good-looking man in Pakistan? We want to hear from you. Write to us in the Comments Section or on 51VOA.COM.

sensation – n. someone or something that causes a lot of excitement and interest

captivate – v. someone or something that causes a lot of excitement and interest

model – n. a person who wears clothing or jewelry that are for sale

viral – adj. spreading very quickly to many people especially through the Internet

handsome – adj. pleasing to look at