Pakistan Meets with US Ambassador over Trump’s Comments

Update Required To play the media you will need to either update your browser to a recent version or update your Flash plugin.
By George Grow
02 January, 2018


Pakistan called a meeting with the United States ambassador in Islamabad Tuesday.

The talks came one day after U.S. President Donald Trump criticized Pakistan for continuing to provide shelter for terrorists. He was speaking about militants who are fighting U.S. forces in nearby Afghanistan.

The president's comments about Pakistan appeared on the Twitter online messaging service. 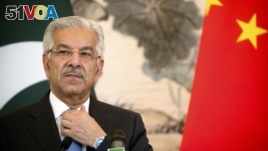 In his first tweet of 2018, Trump said the U.S. government has "foolishly" given Pakistan over 33 billion dollars in aid over the past 15 years. In return, he continued, the U.S. had gotten "nothing but lies & deceit, thinking of our leaders as fools."

Trump added, "They (Pakistan's government) give safe haven to the terrorists we hunt in Afghanistan, with little help. No more!"

U.S. officials have long accused Pakistan of failing to deal with or of secretly helping the Afghan Taliban and the Haqqani network. The two groups have carried out cross-border attacks against Afghan and U.S.-led forces.

On Monday, Pakistani Foreign Minister Khawaja Asif reacted to Trump's comments. The official wrote on Twitter that his country "will let the world know the truth...difference between facts and fiction."

Rafiq Dossani is with the Rand Corporation research group.

"There is no doubt that Pakistan remains a safe haven in many areas for terrorist activity. I mean, compared to the last two years, things have changed dramatically for the better, but not at the level where it should be."

Dossani told VOA that Asif wants the world to know that his country "is in the front lines of the battle against terrorism." He said Pakistanis believe they have paid dearly for problems that were created a long time ago "without their consent."

He was speaking about the 1979 invasion of Afghanistan by the former Soviet Union.

Dossani said Pakistanis "feel aggrieved" that what they have lost "is so much more than any other country." He said that their failures have been recognized more than their sacrifices.

President Trump announced his administration's policy on South Asia last August. At the time, he accused Pakistan of providing "safe haven" to terrorists.

The administration also announced at the time that it was suspending $255 million in military assistance until Pakistan takes steps to fight extremists.

Richard Green and Ayuz Gul reported on this story for VOANews. George Grow adapted their report for Learning English. Mario Ritter Jr. was the editor.

haven – n. a place of shelter or safety

fiction – n. a made-up story; something that is not true

consent – n. approval; a sign of agreement on an action

aggrieve – v. to give pain or trouble to; to cause an injury