Update Required To play the media you will need to either update your browser to a recent version or update your Flash plugin.
By Jim Dresbach
02 February, 2016


Imran Khan – Pakistani sports star and now politician – says he wants to bring peace to the region through talks.

Khan says he wants Afghanistan's Taliban to negotiate a peaceful resolution to its conflict with the Afghan government.

Khan gave an exclusive interview to VOA at his suburban Islamabad home. He said he believes talks could lead to solutions to regional problems. 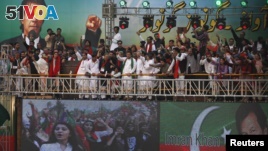 Supporters of Imran Khan (on screens top and R), chairman of the opposition Pakistan Tehreek-e-Insaf (PTI) political party, chant anti-government slogans during his speech at a rally in Karachi September 21, 2014. Protesters led by Imran Khan, a former cricket star, and Tahir ul-Qadri, a firebrand cleric, have been locked in a bitter stand-off with the government since mid-August. (REUTERS/Akhtar Soomro)

The Taliban "must come to the table, and they must resolve this dispute through talks and negotiations," Khan said. "War is never a solution. In fact, war leads to unintended consequences just like in Iraq and Syria."

Khan is a former cricket player, who won the 1992 World Cup for Pakistan. Now, he is a parliamentary leader and major political force in Pakistan.

Because he is a cricket legend, he is popular with many groups in Pakistan and Afghanistan who fight about other issues.

He was opposed to the U.S.-led military invasion of Afghanistan and American drone strikes against suspected militant hideouts in the Pakistani tribal region.

However, he has said he is strongly against Taliban violence, and he supports military crackdowns against the Taliban. Khan said those crackdowns have reduced terrorism.

Khan praised a peace process that includes Afghanistan, Pakistan, China and the United States. It is trying to restart peace talks between the Taliban and the Afghan government.

"I think it is a very positive thing. We hope and we pray that there is some sort of peace deal, some sort of a power-sharing agreement and then the Americans leave," he said.

Ayaz Gul reported on this story for VOANews. Jim Dresbach adapted this story for Learning English. Kathleen Struck was the editor. We want to hear from you. Write to us in the Comments Section or visit our 51VOA.COM.

suburban – adj. living in or relating to a suburb or to suburbs in general

cricket – n. a game played on a large field by two teams of 11 players who try to score runs by hitting a small ball with a bat and then running between two sets of wooden sticks

hideout – n. a place where someone hides to avoid being found or captured

crackdown – n. a serious attempt to punish people for doing something that is not allowed