Update Required To play the media you will need to either update your browser to a recent version or update your Flash plugin.
By John Russell
20 September 2022


A Palestinian man in Gaza has discovered one of the greatest historical treasures ever found in the area, experts say.

Archaeologists and other researchers are excited about the find: a mosaic floor. A mosaic is a surface made with small pieces of colored glass or stone, sometimes creating a picture of something.

But the discovery is also leading people to demand better protection of Gaza's ancient objects. Such objects are threatened by a lack of awareness and resources as well as the risk of conflict between Israel and Gaza. 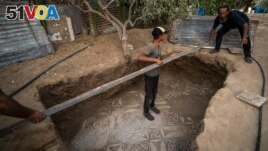 Palestinians clean around a Byzantine-era mosaic floor that was uncovered recently by a farmer in Bureij in central Gaza Strip, Sept. 5, 2022. (AP Photo/Fatima Shbair)

Last spring, Salman al-Nabahin was planting a new olive tree when his shovel hit a hard object. He called his son for help in digging out the large piece. It took three months before they fully uncovered a mosaic floor from the Byzantine period, more than 1,000 years old. The colors are still bright and the piece is in good condition. The mosaic design includes images of birds and other animals.

The farmer's property is just a kilometer from the Israeli border.

René Elter is an archaeologist from the French Biblical and Archaeological School of Jerusalem.

"These are the most beautiful mosaic floors discovered in Gaza,"
he said.

Elter added the mosaic dates back to a time between the 5th and the 7th centuries. But he said a careful study must be done to learn when exactly it was built and whether it was part of a religious or non-religious building.

Elter, who has done research in Gaza in the past, has not been able to visit the site. But he viewed a series of still images, or photographs, and videos from local research partners.

The Gaza Strip, a Palestinian coastal area between Israel and Egypt, was a busy trade path between Egypt and the Levant in ancient times. The area is full of remains of ancient civilizations, from the Bronze Age to the Islamic and Ottoman eras.

However, the treasures are rarely protected. In the past, they were stolen. In recent years, some were damaged or destroyed by development projects or fighting with Israel. An Israeli-Egyptian blockade was established after the Hamas group took leadership of Gaza in 2007. The blockade has hurt Gaza's economy, leaving few resources for the protection of ancient objects.

Hamas itself pays little attention to the care of ancient sites as it tries to meet the needs of a quickly growing population. More than 2.3 million Gazans live in the 300-square-kilometer territory. In 2017, digging machines destroyed large parts of a site containing remains from a 4,500-year-old Bronze Age settlement to make housing projects for Hamas employees.

Among the few protected ancient sites in Gaza are the St. Hilarion monastery, built in the late Roman Empire, and a Byzantine church that aid groups repaired and opened this year.

While these sites also have mosaics, Elter said the latest discovery, in the central Gaza town of Bureij, is "exceptional."

Al-Nabahin has covered the mosaic floor with metal sheets. He said he hopes to receive payment for protecting the special discovery on his property.

Fares Akram reported on this story for the Associated Press. John Russell adapted it for VOA Learning English.

shovel – n. a tool with a long handle that is used for lifting and throwing dirt, sand, snow, etc.

tomb – n. a building or chamber above or below the ground in which a dead body is kept