Update Required To play the media you will need to either update your browser to a recent version or update your Flash plugin.
By VOA
30 November, 2012

"The voting has been completed. Please lock the machines...(applause)."

One hundred thirty-eight UN members voted for the resolution. Nine nations were opposed. Forty-one others chose not to vote. 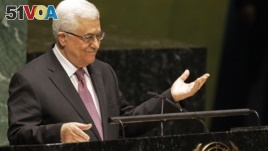 "We did not come here seeking to delegitimize a state established years ago, and that is Israel. Rather we came to affirm the legitimacy of a state that must now achieve its independence, and that is Palestine."

He added that supporters of the resolution are showing what he called their "principled and moral support for freedom and the rights of peoples and international law and peace."

The United States, Israel and seven other countries opposed the measure. American Ambassador Susan Rice spoke after the vote.

"Today's grand pronouncements will soon fade. And the Palestinian people will wake up tomorrow and find that little about their lives has changed, save that the prospects of a durable peace have only receded."

The Israeli government denounced the UN decision. Prime Minister Benjamin Netanyahu dismissed the assembly vote as meaningless. Israel's UN ambassador, Ron Prosor, said the new status will not help the peace process. Yet some Palestinians say they hope the move will lead to new peace talks between the Palestinian Authority and Israel.

Talks between the two sides were last held in September of twenty ten. The negotiations stopped when Israel refused to extend its ban on new settlement activity in occupied Palestinian territory.

There was great celebration in the West Bank and Gaza Strip after the General Assembly vote. Palestinians cheered, saying the vote added support to their claim of statehood. However, the cheers could soon disappear if critics of the resolution take new economic or political action against the Palestinians.

On Thursday, some American Senators threatened to halt aid to the UN if the Palestinian Authority uses its non-member status to bring cases against Israel to the International Criminal Court.

Separately, Israel could hold back tax money it collects and passes along to the Palestinian Authority. Israel could also decide to expand Jewish settlements in Arab areas.
Related Articles
go top