Update Required To play the media you will need to either update your browser to a recent version or update your Flash plugin.
By Mario Ritter Jr.
22 February 2020


The economic effects of the new coronavirus outbreak have spread from China all the way to the West Bank city of Hebron.

Hebron is the largest Palestinian city. It is also the business center for the Palestinian territories. And, Chinese-made goods have flooded markets there for more than 20 years.

Now, traders in Hebron are worried that they may have to change to more costly products if China's economic output falls because of the disease outbreak. If that happens, the traders will have to pass on higher prices to buyers in what is already a weak economy. 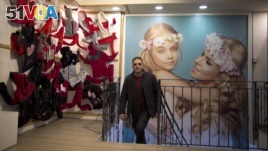 In this Wednesday, Feb. 12, 2020 photo, Palestinian shopkeeper Samer Abu Eisheh walks up stairs in his store, which carries children's clothes imported from China, in the West Bank city Hebron.

China exports more goods than any other country. But the outbreak of the new coronavirus threatens to affect trade almost everywhere.

The new coronavirus disease, recently named COVID-19, first appeared in central China's city of Wuhan in December. Since then, it has spread to more than 20 countries.

No cases have been identified in Israel or the Palestinian territories. But merchants there have felt the economic effects of the disease.

Samer Abu Eisha sells children's clothes to stores in Hebron. He has been importing Chinese-made products for more than 20 years. He has a permit from Israel that lets him travel from Israel to the Chinese city of Guangzhou every two months. There, he orders products and oversees production.

But business came to a halt last month as travel bans took effect in China. Israel and neighboring Jordan suspended all flights to China. Product orders have been delayed or frozen. And, Abu Eisha told the Associated Press, his agent in China has been ordered to stay inside his home because of the virus.

Abu Eisha said if the situation continues, he will have to explore other choices. He said he might try Turkey. But business would not be the same.

"It's hard because all the raw materials also come from China, so things will be more expensive," he said. Abu Eisha estimates he will have to raise prices by 30 percent. But a poor economy and limited development mean that many Palestinians depend on low-cost imports.

"The economy here is terrible. In Palestine, it's zero, or less than zero," Abu Eisha said.

In the 1990s, the Oslo Accord agreements between the Palestinians and Israel permitted the new Palestinian Authority to set trade policy in the territories. As a result, Palestinians bought Chinese goods.

In 1998, $33 million in goods were imported. By 2018, the Palestinian Central Bureau of Statistics reported that the total had grown to $425 million.

The imports hurt local manufacturers, including Hebron's well-known shoemaking industry. Abdo Idrees is the head of Hebron's Chamber of Commerce. He said the number of factory workers making shoes had gone from 35,000 in the 1990s to fewer than 8,000 today.

A visit to the Old City shows just how common Chinese imports are in Hebron.

One seller said half of his souvenirs come from China. He recently went to a local trader to order more Chinese products, but none were available.

"He said China's closed. That will have a huge impact on my business if it continues," he said.

Another seller in the market admitted that he offers Chinese goods, but blamed them for the decline in local industries.

Joseph Krauss and Mohammed Daraghmeh reported this story for the Associated Press. Mario Ritter Jr. adapted it for VOA Learning English. Ashley Thompson was the editor.

confined –adj. put in a small space, unable to get out

souvenir –n. something kept as a reminder of a place visited

outbreak –n. the appearance and spread of a disease

merchant –n. someone who sells products

decline –n. a decrease in something