Update Required To play the media you will need to either update your browser to a recent version or update your Flash plugin.
By Dan Friedell
21 February 2021


When many people in the U.S. were forced to work from home in the early days of the coronavirus health crisis, they decided to get a dog.

People say having a dog offers companionship and a reason to get exercise. After all, dogs need to get outside and walk.

Adriana Magarin is a new dog owner in Houston, Texas. She said she got a dog because, "you can only read so many books, you can only listen to so many podcasts." 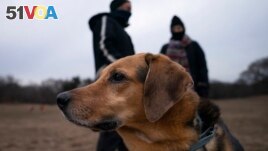 In most cases, dog owners take their animals for walks with a leash. But in some places, there are open spaces where dogs are permitted to play with other dogs without wearing a leash. These places are called dog parks.

Expert dog trainers say social activities that can happen at dog parks are important for the animals, especially young ones, known as puppies. However, putting a young dog and a new dog owner in a completely new situation -- like a dog park -- can be frightening for both.

Some owners worry about letting their dogs off their leash. What if the dogs do not come back when called?

One woman, Josslyn Shapiro, had an idea for getting her dog, Appa, to come when called. "If I bring chicken, he's OK," she said.

Darris Cooper is head of national training for pet supply company Petco. He said Shapiro's idea is exactly right. The chicken pieces act like a magnet for the dog.

Here are some steps to get your dog to come when called.

Put a treat near the dog's nose. Then walk away.

Call the dog with a repeated noise, like whistling or making another kind of sound with your mouth.

As the dog starts in your direction, make sure to give happy praise, like "good girl!" Then give the dog a food reward.

Tim Steele is a dog trainer in Sacramento, California. He suggests practicing such steps repeatedly and giving the dog a reward for obeying. If this is repeated a number of times per day, Steele said, "you should have a solid recall in about three weeks."

One question that often comes up is how to tell whether your dog is playing or fighting with other dogs. How can a new owner tell the difference? Experts say it is important to try to learn the dog's body language.

For example, Cooper said if a dog has his tail down, "it's best to end" any contact with other dogs. He added that if your dog jumps at or bites another dog or person, you should seek help from a trainer.

All this may seem like a lot of effort and concern for a pet. But one expert notes that for Americans, dogs are like members of the family.

Ashley Valm is the director of pet placements for the Humane Rescue Alliance, an animal protection organization in Washington, D.C.

"What people tend to value about their relationships with their pets is unconditional love, right? That comes with no strings attached. No judgement, no hesitation, right? That you get home and your animal is just thrilled to see you. And it can be this pure companionship that can be hard to find."

And if you feel like your dog is a member of the family, it makes sense that you would want to be careful when offering a new situation to a young dog.

Valm said a lot of people came to her organization looking to bring a dog into their life at the start of the pandemic. But some were worried that dogs might take too much responsibility. At the same time, her organization was concerned it might have to help dogs whose owners did not have the money to keep them because of problems caused by the pandemic.

But Valm said she later realized that most people are willing to sacrifice things in their own life to remain dog owners.

"People will figure it out. They have a pet in their home and they love it. They do everything they can to make sure they don't have to give up their animal."

They also do everything they can to keep their dogs safe at the dog park. Once new dog owners and their dogs feel at ease, the dog park can be a great way for both of them to make new social connections.

Ted Hausman said he is happy to see new owners bringing their dogs to his local park in Brooklyn, New York. "It's nice people are experiencing the joy of dog ownership," Hausman said. "It's a good silver lining to the pandemic."

Beth Harpaz of The Associated Press wrote this story. Dan Friedell adapted it for Learning English. Bryan Lynn was the editor.

What would you do to make sure your dog was safe at the dog park? We want to hear from you. Write to us in the Comments Section and visit 51VOA.COM.

pet- n. an animal (such as a dog, cat, bird, or fish) that people keep mainly for pleasure

companionship- n. the good feeling that comes from being with someone else

leash –n. a long, thin piece of rope, chain, etc., that is used for holding a dog or other animal

treat- n. something that tastes good and that is not eaten often

recall- n. the ability to remember what has been learned or experienced in the past

no strings attached- n. something that carries no special conditions

hesitation - n. a pause before during something

figure it out –v. to understand or find (something, such as a reason or a solution) by thinking

silver lining- n. something good that can be found in a bad situation