Update Required To play the media you will need to either update your browser to a recent version or update your Flash plugin.
By Alice Bryant
24 August 2021


There has been a long list of difficulties with distance learning during the pandemic. But public school systems across the United States are now setting up more virtual learning centers. They hope to serve families who feel remote learning works best for their children.

Thirty-eight state education departments answered an Associated Press survey this summer. Their answers showed more permanent virtual schools and programs will be in place in the coming school year.

Some parents are concerned about the coronavirus. But they also like the independence that comes with remote schooling.

In addition, schools want to improve attendance. They have seen too many students leave for virtual schools, home schooling, private schools and other choices. Fewer students could mean less financing for school districts. 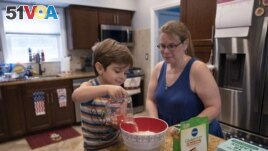 Logan Strauss, 5, adds water to a cake mix while baking with his mother Karen at their home in Basking Ridge, N.J., Wednesday, July 28, 2021. Logan will continue with remote learning from home until he can get the COVID-19 vaccination. (AP Photo/Mark Lennihan)

Dan Domenech is executive director of the American Association of School Administrators. He said virtual schooling is the future.

"Some of these states might be denying it now. But soon they will have to get in line because they will see other states doing it," he said. And they will see why it is a good idea.

Karen Strauss is a parent in the U.S. state of New Jersey. She lost a brother-in-law to the pandemic. Her vaccinated teenager will return to school in person. But she wants her 5-year-old son, Logan, at home until he can get the vaccine. Strauss said Logan has done well online under the guidance of his teachers.

"If learning from home is what's best for them, why not do that? What's the reason, except that people are afraid of change?" she said.

School districts' plans for long-term, full-time virtual programs grew during the pandemic. Students in virtual learning centers usually are educated separately from a district's other students.

In Virginia, before the pandemic, most local virtual programs offered individual classes only to grades 6-12. Few offered full-time learning. But in the new school year, 110 of Virginia's 132 school districts will use Virtual Virginia, a state-operated program that includes all grades. It will provide some or all of their full-time virtual schooling, spokesperson Charles Pyle said.

So far, more than 7,500 students have enrolled in Virtual Virginia full time for the fall. That compares with just a little over 400 students in the 2019-20 school year, he said.

In Tennessee, state officials approved 29 new online schools for the 2021-22 school year. That is more than two times the number created over the last ten years, spokesperson Brian Blackley said.

Like most U.S. states, New Mexico is requiring schools to offer in-person learning this year. But the Rio Rancho Public Schools used federal money to add the remote SpaRRk Academy for K-5 grades. A survey found nearly 600 of the 7,500 student families wanted to continue virtual schooling.

The spread of COVID-19's delta variant and rising infection rates have caused worry at the start of this school year. But President Joe Biden and educators across the country suggest returning to in-person schooling. Their main concern is that many students were served poorly by distance learning.

Test scores in Texas showed the percentage of students reading at their grade level fell to the lowest levels since 2017. Louisiana tests scores also showed that public school students who attended in-person classes during the pandemic did better.

Research before the pandemic raised questions about the performance of fully virtual schools. A 2019 report from the National Education Policy Center said data was limited by inconsistent reporting and school requirements. But it showed that only 48.5 percent rated acceptable out of 320 virtual schools with available ratings.

Domenech said families seeking virtual schooling often have children who are strong students. Remote learning is great for personalized learning because it lets them move at their own speed, he said.

Massachusetts, for example, requires districts to give proposals that include details about equitable access, curriculum and demand. New online schools in Arizona have a trial period until student performance proves the schools are academically sound.

At least some of the virtual schools that districts set up may never take in students. In North Carolina, 52 districts made plans for fully virtual schools. Some were set up only in case they were needed, says education department spokesperson Mary Lee Gibson.

States like New Jersey, Texas and Illinois have removed widespread remote choices. Instead, they are giving the choice to students with special situations. But some parents are pushing back.

New Jersey mother Deborah Odore said she wants her son and daughter to continue schooling remotely this year for health reasons. They are too young to be vaccinated.

survey – n. an activity in which many people are asked questions in order to gather information about what most people do or think about something

(school) district – n. an area or region containing the schools that a school board is in charge of

score – n. the number of points that someone gets for correct answers on a test or exam

enroll - v. to enter someone as a member of or participant in something

curriculum – n. the courses that are taught by a school, college or program