Update Required To play the media you will need to either update your browser to a recent version or update your Flash plugin.
By Alice Bryant
27 December, 2017


One of the world's largest paper companies has gone against its promise to end several land disputes in Indonesia.

The company, Asia Pulp & Paper, makes many kinds of paper products that people all over the world use, including photocopy paper, cigarette boxes, bottle labels, food wrappers and noodle cups.

It wants to use a wood supplier company that has been at the center of land conflicts. Through that supplier, Asia Pulp & Paper is going forward with plans to take 66,000 hectares of state land in the group of islands called Bangka Belitung, near Sumatra.

Such a move would affect some 100,000 people. Forty villages oppose it. It differs from Asia Pulp & Paper's promise less than five years ago to gain the "free, prior and informed consent" of local communities when developing new plantations. 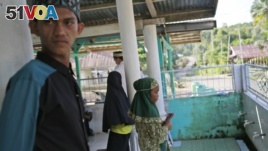 Local young people wait for a Quran reading class to start at a mosque in a village which is feared will be affected by the expansion of the Asia Pulp & Paper, a company part of Indonesian corporation Sinarmas, in West Bangka, Indonesia.

Free, Prior and Informed Consent, also known as FPIC, is an international law protecting the rights of indigenous people. It requires companies to include local communities in decisions about their land and any other decisions that may affect them.

Bangka and another major island in the area have already been harmed and polluted by illegal tin mining. Villagers are also distrustful of industrial plantations, after palm oil companies broke promises about their land.

The letters B-R-S stand for Bangun Rimba Sejahtera, the supplier company that is a front for Asia Pulp & Paper's expansion in the area. The company says BRS is close to being approved as a wood supplier.

"If this land is taken by BRS, where shall we go?" said Yunus, the religious leader of Tambang Enam village.

"This land supports our society and economy," he said. "We are ready to go to war. It's better than dying slowly. It's better for us to die at once."

Asia Pulp & Paper is the name for a group of mills and forestry companies. Together, they are part of the international company Sinarmas, which is run by an Indonesian family.

However, AP reporters recently looked into the ownership of 27 companies that supply Sinaramas. They found that Sinaramas has a powerful influence over most of the companies.

Documents show that BRS was a Sinarmas-owned company for much of the past 10 years. In the documents, BRS' ties to Sinarmas appear to end in 2013. That is when it received its license to the state land on Bangka.

In West Bangka, thousands of villagers have been protesting against the company outside local government offices.

"No matter how hard they try to force us, we will not give even one scrap of land to any company," said Sartojoyo, the head of Simpang Tiga village.

Villagers make a living by growing palm oil, Muntok peppercorns and other crops such as rubber and rice. They also grow medicinal crops and wild honey, as well as a profitable type of mushroom from forests that make up about 15 percent of the land the state gave to BRS.

In May, more than half of the 40 affected villages described their opposition in a letter to the local government. They also sent the letter to Indonesia's ministry of forestry and environment.

Some village officials say BRS offered what it called a "partnership." The deal would permit villagers to use a small part of the land, but only to grow rubber.

Kasdani, the leader of Air Menduyung village, said the company contacted him in May and offered to set up a meeting with Sinarmas. But he refused; he said no one in his village wants to surrender land.

"It's our livelihood," Kasdani said.

prior – adj. existing earlier in time

indigenous – adj. living, or existing naturally in a particular region or environment

tin – n. a soft, shiny, bluish-white metal that has many uses

plantation – n. a large area of land especially in a hot part of the world where crops are grown

palm oil – n. oil taken from the fruit of some palm trees and used in cooking and in making soap and other products

front – n. someone or something that hides or protects an illegal activity

mill – n. a building in which a particular product is made