Update Required To play the media you will need to either update your browser to a recent version or update your Flash plugin.
By John Russell
30 October 2022


Lili Cantero is preparing a new colorful show of her work to take to the World Cup in Qatar. The 29-year-old Paraguayan artist is famous for painting soccer shoes for stars including Lionel Messi and Ronaldinho.

The more than twenty artworks included sets of shoes, balls and paintings. Many of these artworks are inspired by the Middle Eastern nation and its capital Doha. The city will host national teams from around the world next month to compete in the World Cup.

Cantero had almost decided to stop painting when she sent a pair of shoes to Argentine star Lionel Messi, who was playing at Barcelona. The shoes had lovely details with black and white images of the soccer player and his family. 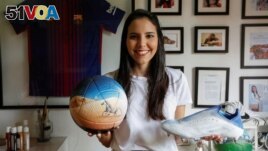 She did not know if Messi would even receive the shoes. But to her surprise, she received a photo of Messi, one of the world's best soccer players, holding them. That marked a turning point in her career.

"Messi's boots marked a before and after," said Cantero. She added, "It was a nice moment because thanks to that many doors were opened and my career really started."

Her colorful designs drew attention from other players. She met former Brazil player Ronaldinho Gaucho two years ago in Asuncion. And she gave him boots and a ball showing a kiss his mother had given him after winning the Ballon d'Or in 2005.

In Qatar, Cantero plans to show eight balls with designs that pay respect to the countries that have won the World Cup: Brazil, Germany, Italy, Argentina, Uruguay, France, England and Spain.

The boots will be presented within three-dimensional structures that look like the stadiums that Qatar built for the World Cup. The remaining artworks will mix parts of Qatari and Paraguayan cultures.

"I have been working on this for three years and it is a great pride for me to represent my country at this World Cup," Cantero said.

"In Latin America, football is lived with a great passion and that influenced me a lot," she said. "Since I was a girl, I have been living football... it is something that I always liked as well as art and so I found a way to connect the two things."

Daniela Desantis reported on this story for Reuters. John Russell adapted it for VOA Learning English.

soccer – n. a game played between two teams of 11 players in which a round ball is moved toward a goal usually by kicking (also called football)

stadium -- n. a very large usually roofless building that has a large open area surrounded by many rows of seats and that is used for sports events, concerts, etc.

passion – n. a strong feeling of enthusiasm or excitement for something or about doing something