Update Required To play the media you will need to either update your browser to a recent version or update your Flash plugin.
By Dan Friedell
07 July, 2017

Pardinho is a pitcher. He can throw a baseball over 145 kilometers per hour.

That is just about the average speed of a fast pitch in Major League Baseball. But Pardinho should get even better. After all, he is only 16.

If Pardinho makes it to the major leagues, he will be only the fourth Brazilian-born player to play at that level. Cleveland Indians catcher Yan Gomes was the first.

Pardinho was rated as the fifth-best international prospect by MLBPipeline.com. He throws right-handed and is only 1.72 meters tall, which is short for a pitcher.

He received over $1 million for agreeing to play in the Blue Jays' organization.

Pardinho said he was six years old when he started playing. His uncle saw him playing paddleball on the beach and thought he might make a good baseball player. 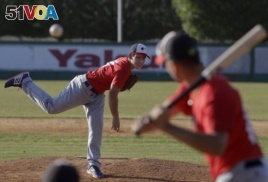 In this June 23, 2017 photo, pitcher Eric Pardinho throws a pitch during practice in Ibiuna, Brazil.

So when they returned to their hometown of Bastos, they started practicing. While baseball is not well-known in Brazil, Bastos has a large Japanese influence, and baseball is a popular sport in Japan.

Pardinho's grandparents on his mother's side of the family are Japanese.

Many Brazilian coaches see Pardinho as a player who could help the national baseball team make the Olympics when the sport returns at the 2020 Tokyo Games.

Baseball players who have batted against Pardinho say he is very good, even though he is short.

Victor Coutinho said: "his height doesn't matter, because his arm can do wonders."

Pardinho's coach is Mitsuyoshi Sato. He helps Pardinho improve and get stronger, but he also makes sure the prospect does not throw too often.

"I don't want him to do too many fastballs now because I worry about a possible injury," he said.

Pardinho thinks he could make baseball more popular in Brazil if he goes on to have a good career.

"Maybe more and more Brazilians, not only those of Japanese heritage, will think of playing on a diamond, too," he said.

Dan Friedell adapted this story for Learning English based on reports by the Associated Press and MLB.com. Hai Do was the editor.

Do you think Eric Pardinho will make it to Major League Baseball one day? We want to know. Write to us in the Comments Section or on 51VOA.COM.

prospect – n. someone or something that is likely to succeed or to be chosen

bat – v. to try to hit a ball with a bat in baseball, cricket, or a similar game