Update Required To play the media you will need to either update your browser to a recent version or update your Flash plugin.
By Gregory Stachel
01 August 2021


The coronavirus health crisis has caused problems for many families since taking hold last year. But some parents are thankful for one change: they are choosing to homeschool their children, even as schools plan to start in-person classes.

There are many different reasons for this. The Associated Press spoke to several families. Some families have children with special educational needs. Others seek religion-based schooling or say their local schools have too many problems.

They all have something in common: they tried homeschooling as a temporary measure and found that it helped their children.

The U.S. Census Bureau reported in March that the percentage of households homeschooling their children rose to 11 percent by September 2020. That number was 5.4 percent just six months earlier.

The increase was largest in Black households. Their homeschooling percentage rose from 3.3 percent in the spring of 2020 to 16.1 percent in the fall.

Arlena and Robert Brown of Austin, Texas have three school-age children. Then the pandemic took hold. After experimenting with online learning, they decided to try homeschooling. They taught a curriculum provided by Seton Home Study School that is based on Catholic religious teachings. The homeschooling service has 16,000 students in the United States.

The Browns plan to continue homeschooling for the coming year. They are pleased that they can make the curriculum fit their children's needs. Eleven-year-old Jacoby has a condition that requires rest during the day. Riley is 10 and is considered "gifted" at school. And Felicity, aged 9, has a learning disability.

Robert Brown is a former teacher who now advises businesses. He said he wants his children to do their best and have a solid understanding of their religion.

Arlena Brown said the biggest difficulty was to "unschool ourselves and understanding that homeschooling has so much freedom." She said, "We can go as quickly or slowly as we need to." 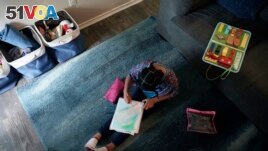 Felicity Brown, 9, creates art as she takes a break from math practice at her home in Austin, Texas, Tuesday, July 13, 2021. After homeschooling during the pandemic, the Brown family have started homeschooling their kids permanently using a Catholic-based curriculum and won't be sending them back to in-person schools this fall. (AP Photo/Eric Gay)

Race played an important part in the decision of another Black family to homeschool their 12-year-old son Dorian.

Angela Valentine said Dorian was often the only Black student in his classes in public school in Chicago. He was sometimes treated unfairly by administrators and was hurt when other children stopped playing with him.

As the pandemic eased, the family decided to homeschool Dorian. They are using a curriculum provided by National Black Home Educators that provides materials for each subject about African American history and culture.

Valentine said "making the right choices" was difficult. She added, "But until we're really comfortable with his learning environment, we'll stay on this homeschool journey."

Joyce Burges is co-founder and program director of National Black Home Educators. She said the 21-year-old organization had about 5,000 members before the pandemic and now has more than 35,000.

Burges said many of the new families experienced difficulties, like not having internet service. These problems limited their children's ability to use online learning during the pandemic.

"It got so they didn't trust anything but their own homes, and their children being with them," she said. "Now they're seeing the future, seeing what their children can do."

David Crary reported this story for The Associated Press. Gregory Stachel adapted it for VOA Learning English. Mario Ritter, Jr. was the editor.

curriculum –n. the classes and subjects that are taught by a school or college

disability –n. a condition (such as an illness or an injury) that damages or limits a person's physical or mental abilities

comfortable –adj. not having any physical unpleasant feelings; experiencing physical ease or comfort

journey –n. an act of traveling from one place to another- often used to represent any process that takes a long time