Update Required To play the media you will need to either update your browser to a recent version or update your Flash plugin.
By Dan Friedell
26 April, 2016


The parents of 43 Mexican students missing since 2014 said the government lied to them.

The parents made their claim a day after a group of international experts issued a report criticizing the way the Mexican government handled the case.

One parent said "the government started lying to us from the start."

The Mexican government said the students were training to be teachers at a small college when they were kidnapped. They said corrupt local police officers turned the students over to a drug gang. 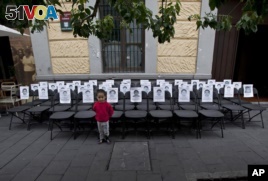 A child stands before a memorial made up of empty chairs bearing images of 43 missing students, set up to mark the nine-month anniversary of their disappearance, in Mexico City, June 27, 2015.

The government said the students were killed and their bodies were burned in a mass grave in the southern part of Mexico.

Experts also said the government provided information from suspects who were tortured by police and military personnel. The torture led to confessions that will not be allowed in court by Mexican judges.

The report also said any information that did not support the government's original description of the case was not taken seriously.

The Mexican president, Enrique Pena Nieto, wrote a message on Twitter saying the government "will analyze the whole report."

In spite of the new report, there is no new information about the students, who have been missing since September 2014.

When the report was presented at a news conference on Sunday, parents chanted: "They took them away alive, we want them back alive!"

Dan Friedell adapted this story for Learning English based on reports by the Associated Press. Hai Do was the editor.

What do you think happened to the Mexican students two years ago? We want to know. Write to us in the Comments Section or on 51VOA.COM.

confession – n. a written or spoken statement in which you say that you have done something wrong or committed a crime