Parents, Leaders Work to End 'Hazing' at US Colleges

Update Required To play the media you will need to either update your browser to a recent version or update your Flash plugin.
By Pete Musto
15 September, 2018


Tim Piazza and Marquise Braham told their parents they just wanted to make some new friends by joining college social groups called fraternities. Neither of them got much of a chance.

The two young men died after taking part in extreme rituals for admission into the all-male student groups. They were not even 20 years old.

Now, their parents are launching a campaign to end these rituals across the United States. They are joined by the parents of Max Gruver and Brian Kowiak, two students who died in similar ways. And they have partnered with national leaders of fraternities, and of female student social groups called sororities.

Fraternities and sororities are private social groups common to many colleges and universities in the U.S. They have a long history as part of the American higher education experience.

But there is a darker side to Greek life, as involvement in fraternities and sororities is often called. The term comes from the letters of the ancient Greek alphabet the groups use to make their names.

The process of becoming a member sometimes involves what is called hazing. This is when current members force pledges, those interested in joining, to take part in dangerous, abusive or possibly illegal activities.

Last week, Tim Piazza's father, Jim, and Marquise Braham's father, Rich, began preparing for a number of television appearances. They would use those appearances to announce their anti-hazing campaign.

"I know it might seem strange to some people that families who lost their children to fraternity hazing are now working with fraternities and sororities to eradicate hazing," Jim Piazza told the Associated Press.

"But," he added, "we will do anything that we can to save a life and to prevent another shattered family."

His 19-year-old son died last year after his fraternity "brothers" ordered him to drink a huge amount of alcohol. He became severely intoxicated. He fell repeatedly, including down stairs and into an iron fixture. It was almost 12 hours before the fraternity members called for medical help. He received treatment at a hospital but it was too late. Tim Piazza died from his injuries. 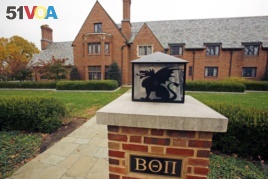 Police arrested almost 30 members of Piazza's Beta Theta Pi fraternity at Pennsylvania State University in Centre County, Pennsylvania. All higher level charges have been dropped. Three people have since admitted their guilt to lesser charges and one is already under house arrest.

The Piazzas have reached a settlement with the fraternity to end the civil legal action the family had sought.

Eighteen-year-old Pennsylvania State University student Marquise Braham killed himself in 2014. His suicide took place after a series of extreme Phi Sigma Kappa fraternity hazing rituals, about which he had protested to school officials.

"Currently the system — and that's the police, the district attorneys, the judges — they seem to view hazing as it's kind of like kids' stuff," said Braham's father, Rich.

These fathers say they are happy to have found allies at the top of the North American Interfraternity Conference and the National Panhellenic Conference. Together, these organizations represent nearly 100 fraternities and sororities nationwide. And their leaders are ready and willing to work with Piazza and Braham.

Judson Horras is the president of the North American Interfraternity Conference. He said a first goal is of this new joint effort is to press lawmakers in all 50 states to strengthen anti-hazing laws. They want lawmakers to make it a felony to force a student to drink alcohol.

Some state governments have been slow to strengthen such laws in the past. But Horras said he believes Greek organizations can get them to change their policies.

"Keep in mind fraternities and sororities have 9.1 million students and alumni as members," Horras said. "That's part of the network we're building now to make this happen across North America."

His organization is also trying to solve the alcohol issue itself. By this time next year, he said, highly alcoholic drinks will be banned from all fraternity housing of organization members.

"We can do more together than we can alone to address this societal problem," said Carole Jones, Chairman of the National Panhellenic Conference. "The fight against hazing requires that an entire community step up, including sorority women, who can and must do our part to create safer campus cultures."

The Greek life leaders also plan to have parents like Piazza and Braham speak to as many as 25,000 college students this school year. They will talk about the dangers of hazing. And members of fraternities and sororities will be asked to speak to high school and middle school students.

John Rogers reported this story for the Associated Press. Pete Musto adapted it for VOA Learning English. Caty Weaver was the editor. We want to hear from you. How should schools and local governments deal with the issue of hazing? Write to us in the Comments Section or on 51VOA.COM.

ritual(s) – n. an act or series of acts done in a special situation

eradicate – v. to eliminate or destroy something harmful

district attorney(s) – n. a person who is responsible for starting legal cases against people accused of crimes in a given U.S. state or county

felony – n. a serious crime, such as murder or rape

alumni – n. someone who was a student at a given school, college, or university

address – v. to give attention to something