Update Required To play the media you will need to either update your browser to a recent version or update your Flash plugin.
By VOA
11 December, 2015

Representatives from 195 countries have spent two weeks in Paris trying to reach agreement at the United Nations climate talks, known as COP21.

French Foreign Minister Laurent Fabius extended the deadline until Saturday when the deadline could not be met. 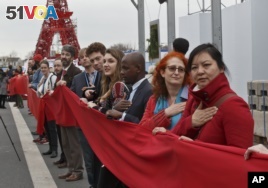 U.S. Secretary of State John Kerry said a lot of progress has been made, but he said, some "very difficult" issues must be resolved.

He met with French Foreign Minister Laurent Fabius Friday after what sources said was a hard night of negotiations.

This conference was working toward capping a rise in global temperatures this century. They wanted to limit the rise to two degrees Celsius above temperatures of the mid-1700s. That is the time that the industrial revolution began.

But there is discussion of making that a rise in 1.5 degrees instead.

The latest draft of the agreement calls for "the widest possible cooperation by all countries" to cut emission of greenhouse gases. Scientists say those gases are warming the planet and changing the climate to an extreme.

A major point of disagreement has been who will pay for reducing these emissions. Representatives of 134 developing countries objected to conditions suggested by richer industrialized nations.

Richer countries – like the U.S. and China - have produced most of the world's greenhouse gas emissions. Those gases are blamed for rising temperatures on the planet. Poorer nations want developed ones to pay for measures that arrest pollution.

Scientists warn that rising temperatures will make Earth more difficult for human life. They say there will be rising sea levels, damaging storms and severe droughts.

Some island nations at the conference said they will disappear underwater when higher global temperatures raise sea levels.

The World Health Organization (WHO) called for a strong agreement to cut global emissions at the conference. It warns that climate change is already blamed for tens of thousands of deaths each year. These deaths are caused by changing borders of disease, extreme weather events and worsening air and water quality and sanitation.

Nations have met since 1992 to discuss ways to stop global warming.

And while the COP21 labored to agree over how to deal with climate change, these stories were happening:

An agreement on limiting carbon dioxide emissions from aviation will likely be reached next year. That is what a senior official from the International Air Transport Association said Thursday. The aviation industry is not covered by the climate talks in Paris because it is under a separate U.N. body, the International Civil Aviation Organization. It is working on ways for airlines to reduce emissions.

A company in Slovenia is hoping to revolutionize the airplane industry with electric planes. The electric two-seater airplane Taurus Electro is made by the Slovenian company Pipistrel. It is powered by battery. Its 15-meter wingspan allows it to be carried by the wind, once it reaches the altitude of 2,000 meters. Pipistrel plans to produce the plane and sell it for about $120,000. But for now, only a few countries will allow electric aircraft.

In the northern Picardy area of France, a dairy farmer is suing the energy company that owns a wind farm next to his property. The farmer says the wind turbine creates a low frequency sound that humans cannot hear, but it troubles animals. He says his cows will not lie down to eat and rest near the wind farm, and so they have stopped producing milk. The case goes to court next month.

A new report says at least four Cambodians were killed in trying to uncover environmental crimes. This makes Cambodia the "deadliest" place in the world for such reporting. The Paris-based organization Reporters without Borders says that both Cambodia and India were deadly countries for environmental journalists. It says 10 environment reporters have died worldwide since 2010. In Cambodia, journalists killed in rural parts of the country have also been suspected of criminal activity. For example, demanding money from illegal loggers to cut back their reporting on forestry crimes.

Anne Ball wrote this story from material by VOA reporters and wire services. Kathleen Struck was the editor.

sticking point – n. something that people disagree about and keeps them from making progress in discussions

sanitation - n. promotion of hygiene and preventing disease by removing sewage and trash

aviation –n. the business or practice of flying airplanes and helicopters

carbon off-sets – n. a credit that an organization can buy to negate a carbon footprint

battery – n. a device placed inside a machine to supply it with electricity

turbine – n. an engine that has a part with blades that spin by pressure from air

frequency – n. the number of times that something, like a sound wave, is repeated in a period of time