Paris, Other French Cities Will Not Broadcast World Cup in Public Areas

Update Required To play the media you will need to either update your browser to a recent version or update your Flash plugin.
By Andrew Smith
06 October 2022


Paris becomes the latest French city that will not broadcast World Cup games in public areas. An official says the city is concerned over rights violations of migrant workers and the environmental impact of the games in Qatar.

Qatar is a small Arab nation in the Persian Gulf. Thousands of migrant workers, mostly from South Asia, have helped build stadiums, train lines, roads and hotels to prepare for the World Cup. 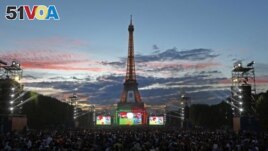 The World Cup takes place every four years during the Northern Hemisphere summer. Because of the intense summer heat in Qatar, the World Cup will be held from November 20 to December 19 this year.

Pierre Rabadan is a deputy mayor of Paris overseeing sports. He told France Bleu Paris radio that "air-conditioned stadiums" and the "conditions in which these facilities have been built are to be questioned."

Paris Saint-Germain, the city's soccer team, is owned by Qatar Sports Investments. But Rabadan added that it "doesn't prevent us to say when we disagree."

A growing number of French cities have also refused to broadcast the games in public areas to protest Qatar's human rights record.

The mayor of Strasbourg, a city in northeastern France, said that accusations of human rights abuses and poor treatment of migrant workers were the reason for canceling public broadcasts of the World Cup. She said in a statement: "...we cannot turn a blind eye when human rights are violated."

Environmentalists across France have also supported canceling outdoor public broadcasts. They say the viewings would use energy that the country has been saving for winter.

In the southwestern city of Bordeaux, officials worry about the energy cost of outdoor public broadcasts in the winter cold. The French government wants to reduce the country's energy use by 10 percent to avoid the risk of cuts this winter.

"We are trying hard to save energy," Bordeaux mayor Pierre Hurmic told the Associated Press.

Arnaud Deslandes, a deputy mayor of Lille, said that by canceling public viewing of games, the city wanted to send a message to FIFA about the damage of the Qatar games to the environment. FIFA is the world governing body for soccer.

"We want to show FIFA that money is not everything," Deslandes said.

impact -n. the effect, often powerful, that one thing has on another

air-conditioned -adj. having a system to circulate air cooler than the outside temperature

facilities -n. buildings, equipment, or other services that are provided for a particular purpose