Update Required To play the media you will need to either update your browser to a recent version or update your Flash plugin.
By Pete Musto
20 March, 2016

But after only one year of teaching at a university in southern Virginia, she is leaving.

McCoy received her doctorate degree, or Ph.D, from the University of Texas at Austin in 2015. She immediately looked for a teaching position. 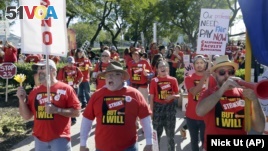 Faculty from campuses all over California, are joined by students, during a rally outside the California State University Board of Trustees meeting at the Chancellor's office in Long Beach, California

But McCoy quickly learned that finding a full-time job at any university was almost impossible.

"When I entered graduate school in 2007, people were picking what city they got to live in. They had multiple offers ... and now there are four jobs in the whole country."

For McCoy and others like her, the world of higher education has changed. Tenured positions, or university teaching positions that last as long as a person wants to keep them, are disappearing.

The Teachers Insurance and Annuity Association (or TIAA Institute) is an organization that studies financial issues for educators. A 2013 TIAA Institute report stated that over the past 30 years, U.S. colleges and universities have changed the types of jobs they offer.

The report said 70 percent of all faculty positions are now part-time, adjunct, temporary, or full-time. But these jobs are not tenure-track.

Johns Hopkins University published a book in 2006 about higher education called "The American Faculty." That book stated that in 1969, 80 percent of faculty positions across the country were tenured or tenure-track.

Teresa Politano has taught media studies part-time at Rutgers University in New Jersey since 1999. Politano says the university has never offered her a full-time, tenure-track position.

She also says the change in the kinds of faculty positions universities are offering is a big problem.

"It's always been a poorly paid position, but in the past I think the employee and the university viewed the position differently. It had an added value. ... Now ... what we're seeing is not only do we have a greater reliance by the university on part-time faculty. But we're also seeing a lot of part-timers who are working two or three or four or sometimes eight to 10 different classes, and sometimes over three or four different universities in order to piece together a living."

Politano is also the president of the union representing part-time faculty at Rutgers. She fights so full-time and part-time faculty can receive equal pay for equal work. The union was able to negotiate a 5 percent pay increase from the administration in December.

But, Politano says, not all faculty are so lucky.

David Chatfield teaches graphic design at Lincoln University in Pennsylvania and Cumberland County College in New Jersey. He also helps organize faculty for the American Federation of Teachers (or AFT). The AFT is a union that represents teachers across the country.

Chatfield says being a part-time professor at more than one school is not only difficult financially. It also divides his attention and prevents him from having a relationship with his students.

"I'm just a body that the administration puts in front of a class because they need to fill the class... and that's about it. So I don't feel like they value me, because I don't have an office ... I don't get paid for any extra stuff that I do for my students outside of class."

Chatfield adds that his schools limit the amount he can teach so they can legally avoid giving him benefits. He also said other part-time faculty he has met through working with the AFT are tired.

"You'll get exhausted from commuting between several schools and teaching more than what is normally expected of a college professor."

The University of California Berkeley Labor Center is an organization that studies labor issues. A 2015 Labor Center report said 25 percent of part-time faculty across the country use some form of public assistance program. These programs help people with little money pay for basic needs, like food and health care.

Faculty in the California State University (or CSU) system are now fighting their administration for greater pay. There are 23 campuses and 25,000 teaching faculty in this system.

About 60 percent of CSU faculty are temporary.

The California Faculty Association (or CFA) is the union that represents a majority of the CSU faculty. The CFA is asking for a 5 percent pay increase for all faculty. If the administration does not agree, the CFA says its members will strike on April 13.

Jennifer Eagan is a professor of philosophy at California State University at East Bay. She is also the president of the CFA.

Toni Molle is the Director of Public Affairs of the CSU system. She says the system only has enough money to provide a 2 percent pay increase. She also notes the administration takes great efforts to care for its teachers. For example, faculty only need to teach two classes for them and their families to receive benefits.

But, Molle says, the administration has many priorities it must consider.

"These are essentially fixed costs and we have other fixed costs, such as infrastructure, technology, building and equipment..."

Molle adds the CSU budget is $135 million below what she calls ‘pre-recession' levels. The U.S. economy went through a recession from 2007 to 2012. In January, California Governor Jerry Brown promised $152 million for the CSU system in 2016. But Molle says that does not solve their current problems.

Eagan argues that the problem of underpaying faculty has existed for 10 years. The administration gave the faculty a 1.34 percent pay increase in 2013 and a 1.6 percent increase in 2014. But Eagan says this does not meet the rising cost of living.

Eagan, Politano, Chatfield and McCoy all agree the real problem is more money going to paying administrators. Administrators are moving away from education and towards a corporate model, Eagan says.

"Or do you want to prioritize executives and other priorities that are further away from the student experience? It really is a choice that are made by managers. So maybe their lack of experience in the classroom recently is influencing their decisions."

Molle said 49 percent of CSU employees are faculty; 12.5 percent are management; 38 percent are staff; 0.3 percent are executives. She did not provide the average yearly pay of administrators.

Rutgers is not the only school that pays its administrators high wages. The College and University Professional Association for Human Resources (or CUPA-HR) is an organization that studies employment in higher education.

McCoy did not want to give the name of the school where she teaches. She said she does not know what new career she will choose.

McCoy says most professors stay in higher education despite pay issues because they love teaching. But she does have a warning for anyone thinking of becoming a professor.

"I would tell them not to."

Pete Musto reported on and wrote this story for Learning English. Kathleen Struck was the editor.

Now it's your turn. Are you a teacher who does not receive benefits? Should part-time and full-time faculty make the same amount of money? Let us know in the comments section and on 51VOA.COM.

doctorate degree – n. the highest degree that is given by a university

full-time – adj. done during the full number of hours considered normal or standard

graduate school – n. a course of studies taken at a college or university after earning a bachelor's degree or other first degree

adjunct – adj. added to a teaching staff for only a short time or in a lower position than other staff

tenure-track – adj. relating to or having a teaching job that may lead to tenure

reliance – n. the state of needing someone or something for help or support

benefit(s) – n. something extra such as vacation time or health insurance that an employer gives to workers in addition to their regular pay

exhausted – adj. to have used all of someone's mental or physical energy

commuting – v. traveling regularly to and from a place and especially between where you live and where you work

campus(es) – n. the area and buildings around a university, college or school

priorities – n. the things that someone cares about and thinks are important

infrastructure – n. the basic equipment and structures such as roads and bridges that are needed for a country, region, or organization to function properly

bonus – n. an extra amount of money that is given to an employee

provost – n. an official of high rank at a university