Update Required To play the media you will need to either update your browser to a recent version or update your Flash plugin.
By Caty Weaver
18 April, 2018

Diaz-Canel would become the first person outside the Castro family to hold the highest government office in almost 60 years. The politician turns 58 on Friday.

Raul Castro, however, will remain first secretary of the Communist Party, a position that could be more powerful than president. How much influence Diaz-Canel will have is also an open question. 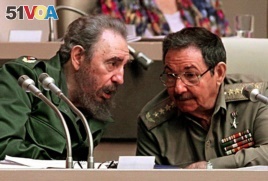 A Cuban President not named Castro?

As president, Raul Castro rides in a big, shiny, imported automobile. When he arrives at official events, people rise up from their seats to cheer.

However, that behavior was not seen recently as a crowd waited for the arrival of the man who will be Cuba's next president.

Recently, voters and provincial officials waited near a voting station in the central city of Santa Clara for Diaz-Canel.

An hour passed, then another. Suddenly, people in the crowd began to move. Down the street, a tall man wearing a loose white shirt walked with his wife and a few bodyguards toward the voting station. Shaking hands and showing ease with voters, Diaz-Canel took his place in line.

"We're building a relationship between the government and the people here," he said after voting for members of Cuba's next National Assembly. He added that elected officials must work at listening to the people, investigating their problems and supporting debate.

The new Cuban president will face an economy with little or no growth, public services in disrepair and a hostile administration in the United States. There is also widespread unhappiness with parts of Cuba's centrally planned system of government.

The Associated Press says most Cubans think of the current first vice president as an average speaker who, at first, rarely appeared in public.

Diaz-Canel was raised and educated in the city of Santa Clara. He attended a local university, and completed his studies in 1982. He then performed three years of required military service. In 1987, he joined the Young Communists' Union. Later, he became a professor of engineering at the University of Santa Clara. During that time, he went to Nicaragua as part of a government-led program to support that country's revolution. 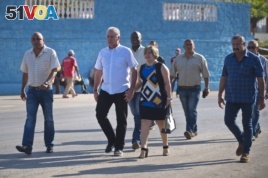 Serving the public by bicycle...

People in Santa Clara remember Diaz-Canel as a long-haired young man who liked the Beatles. Many Cuban officials considered the group representative of the corrupt culture of Cuba's capitalist enemies.

Still, the young professor was named first party secretary in Villa Clara province in 1994. There he gained recognition as a hard-working public servant. He did not move into a new government provided home when he became first secretary. People in Santa Clara told the AP they could not remember another party official making such a choice.

Diaz-Canel traveled on a bicycle during the economic crisis that followed the collapse of the Soviet Union. He accepted visitors to his home and office at all times of the day and night to hear their criticisms or suggestions. He also worked with the local Committee for the Defense of the Revolution, a mix of a neighborhood watch committee and local militia.

In 1996, he began appearing on a local radio program during which he would take two hours of telephone calls from listeners. People would tell him about problems, everything from bad state-financed restaurants to damaged streets.

Radio reporter Xiomara Rodriguez said, "He undertook an intense effort to communicate with the people."

Diaz-Canel also became known for pushing back against some of the ideas of the Communist Party.

As first secretary of Villa Clara, he actively supported a cultural center called El Menjunje. It held rock and roll shows and activities for homosexual Cubans. Diaz-Canel was known for bringing his children with him to the center.

In 2003, Diaz-Canel was named first secretary of the eastern province of Holguin, where he faced opposition.

Some said he spent too much of his six years in office working to make the city center more beautiful. They argued the efforts kept him from answering the needs of poor and working people in the province.

In 2003, Diaz-Canel was also named to the Communist Party's Politburo, a high-level policy making organization. Six years later, he was named minister of higher education and was praised for making educational programs more modern.

From administering to leading

He was also known as one of the first top party officials to bring a laptop computer to government meetings.

In 2012, Communist Party officials closed "Young Cuba," a website operated by young professors at the University of Matanzas. Its bloggers supported Cuba's socialist system, but criticized government corruption, inefficiency and resistance to change.

Diaz-Canel called a meeting between the bloggers and the university.

As first vice president, he has mostly stayed out of public view. He has made few enemies as a result. But he also is left without a deep pool of goodwill to support him in difficult times.

"It will no longer be enough to read from the documents written and approved by the party. He'll need to express ideas," he said.

The former official said Diaz-Canel can no longer be just an administrator, but must "evolve to become a leader."

Andrea Rodriguez and Michael Weissenstein reported this story for the Associated Press. Caty Weaver adapted their report for VOA Learning English. George Grow was the editor.

capitalist - adj. of or relating to capitalism, a way of organizing an economy so that the things that are used to make and transport products (such as land, oil, factories, ships, etc.) are owned by individual people and companies rather than by the government

uncle - n. the brother of your father or mother or the husband of your aunt