Is the Party Over for Uzbekistan's 'Party Girl?'

Update Required To play the media you will need to either update your browser to a recent version or update your Flash plugin.
By Ashley Thompson
17 September, 2014


Gulnara Karimova is the most famous party girl in Central Asia. She has organized fashion shows, designed jewelry, and bought some of the most famous nightclubs in the capital city of Uzbekistan, Tashkent.

She was even, until this July, Uzbekistan's ambassador to the United Nations in Geneva, Switzerland.

Not long ago, people saw her as the heir apparent to the man who has ruled Uzbekistan for many years – her father, Uzbek President Islam Karimov. 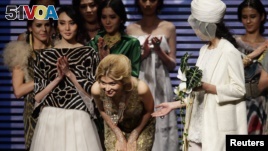 Now, she is a suspect in a major corruption investigation. National prosecutors in the Uzbek capital announced the investigation last week. She is being investigated because of her alleged involvement with an organized crime group.

Many members of an organized crime group, including Karimova's boyfriend, were charged with financial crimes last May.

Ms. Karimova's future as the next leader of Uzbekistan now seems unlikely. Her businesses have collapsed. European investigators have blocked her use of hundreds of millions of dollars kept in overseas banks.

Is the ‘party over' for Ms. Karimova?

Her fall from power began last year. Swedish media reported in October that she was involved in bribing the telecommunications company TeliaSonera.

The company reportedly made payments for rights to operate in the Uzbek cell phone market. Ms. Karimova has denied these allegations. Similar investigations were reportedly taking place in Switzerland and France.

In February of this year, police officers searched Ms. Karimova's house in Tashkent. They also arrested her boyfriend and others allegedly connected to an organized crime group.

In March of this year, Radio Free Europe/Radio Liberty reportedly received a letter from Gulnara Karimova. In it, she is said to have written about her house arrest and being subjected to, in her words, "severe psychological pressure."

Also in March, Swiss prosecutors announced they were investigating Ms. Karimova for possible money laundering and illegal acts taking place in the Uzbek telecommunications market. They said that Swiss officials had seized about $915 million.

Central Asian experts say it is possible that the Uzbek officials are moving forward with this investigation to get control of the seized money from European banks. Not, they say, for political reasons.

Safar Begjan is an Uzbek dissident. He told VOA that he believes the Uzbek prosecutors are, "playing political games with her. Otherwise, they could fine her and put her in jail. Instead now she is just on house arrest, simply because her father is president."

Islam Karimov has ruled Uzbekistan since 1991. At 76 years old, he is the oldest ruler in the former Soviet Central Asia. Uzbek exiles and human rights groups say he has done little to stop corruption in the country.

*This report was based on a story from VOA correspondent Mike Eckel in Washington. Ashley Thompson wrote it for Learning English. George Grow was the editor. A correspondent from VOA's Uzbek Service also provided material for this report.

heir apparent – n. a person who is very likely to have a job or position after the person who has it now leaves

alleged (allegedly/allegation) – adj. accused of having done something wrong or illegal but not yet proven guilty

bribe/bribing – v. to try to get someone to do something by giving or promising something valuable (such as money)

house arrest – n. a law that forces a person to stay in their home rather than in prison as a form of punishment

money laundering – n. a process in which criminal money is transformed into what seems like legal money or other assets.