Update Required To play the media you will need to either update your browser to a recent version or update your Flash plugin.
By Gregory Stachel and Jill Robbins
18 September 2020


Today we answer a question from Taro. Taro writes:

How are "way" and "path" different? Could you explain these more to me? – Taro. 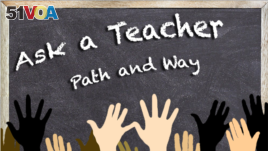 Thank you for writing to us. Both words have more than one meaning. After we consider the meaning of each one, we will look at what the two words have in common. I hope it helps!

The word "way" can mean how someone behaves, appears or feels. Here is an example of how to use it in a sentence:

She just wants to do it her way, and not her mother's way.

"Way" can also mean a method or system for doing something. For example:

The easiest way to do this is to leave plenty of time for everything.

A "path" can be a narrow clearing or markings left in the ground from the movement of people or animals. Some paths are created for people to walk or ride on, such as a bike path. Here is an example:

The bike path led to the beach.

A "path" can also mean a series of actions leading to a result or even a way of living.

She did not enjoy medicine. So, she chose a different career path.

Similarities between ‘way' and ‘path'

Now, let me tell you how the words "way" and "path" are similar.

Both words can describe the area in front of someone or something that is moving. Here are two examples:

A tree had fallen and was blocking our way.

The fire destroyed everything in its path.

"Path" and "way" are also similar when they are describing a road or something that people use to move from one place to another. However, there are some differences between the two words.

One difference is that "way" can describe more than one connected road or path. But we use "path" to describe just one singular road or route. An example of this is:

Can you tell me the way to the beach?

Using "way" here could show that the route has more than one path, but combined they are one "way." So, if you ask:

Which path do I take to get to the old forest?

You probably mean there is one path to get there.

I hope that helps to answer your question, Taro.

What questions do you have about American English? Send us an email at learningenglish@voanews.com

bike - n. bicycle; a two-wheeled vehicle that a person rides by pushing on foot pedals

route – n. a way to get from one place to another place