Update Required To play the media you will need to either update your browser to a recent version or update your Flash plugin.
By Phil Dierking
13 October, 2017


Have you ever heard of a paw paw?

If not, do not feel bad. Most Americans do not know of the fruit, although it is native to the United States.

Once, however, it was one of the most popular fruits in North America.

Happily, those who love the paw paw are trying to return it to its former position in American foods.

A paw paw is a tropical-like fruit that grows on trees found all over the eastern United States. It's also the largest edible fruit native to the US.

It is similar to a typical mango in size. It has a dull green-colored skin, and a soft, almost-creamy orange inside.

Most people agree that the pawpaw tastes like a combination of a banana, an apricot and a mango. Most people are very surprised by its sweet taste.

At one time, it could be found as far west as Nebraska. It also grows along the East Coast from New York to Florida. The fruit has a very short harvest season, from two to three weeks in September and October.

The paw paw was an important food for Native Americans and even early European settlers.

Paw paws reportedly were a favorite treat of George Washington, the first U.S. president, who especially liked them cold. Thomas Jefferson, the third U.S. president, was also a fan of the fruit. He planted paw paws at Monticello, his home in Virginia. He also sent paw paw seeds to his friends in France. American explorers Lewis and Clark wrote in their journals about the paw paw.

In addition, the fruit is good to eat for only two to three days after harvesting. This makes it hard to sell anywhere distant from the paw paw tree it came from. 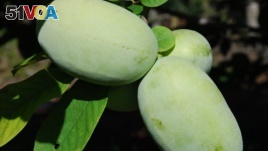 Planters are again growing paw paw trees and harvesting the fruit. In several states farmers have organized "paw paw festivals" to reintroduce people to the food.

At such a festival in Maryland recently, farmers displayed different products made with paw paws. There were paw paw jams, pies, gelato, and beer.

"It has that energy, and the people here today, there's an excitement, because they are trying something totally new but also exotic that grows here."

Farmers are trying to grow kinds of paw paw that will be easier to ship and sell commercially. Donna and Jim Davis are paw paw farmers in Westminster, Maryland. They told National Public Radio that they purchased their paw paw trees in the 1990s and now sell the fruit at farmers markets and online.

So, who knows? Maybe the paw paw will show up soon at a market near you.

Do you have any special fruits or vegetables that you can only find in your country? We want to hear from you. Write to us in the Comments Section or on 51VOA.COM.