Update Required To play the media you will need to either update your browser to a recent version or update your Flash plugin.
By Alice Bryant
04 July 2021


The pandemic has brought one good thing to western Albania's Divjaka-Karavasta Lagoon: peace and quiet for rare pelicans. It is this calm that the birds need to mate – which has led to their population growth.

Area environmental officials say nesting pairs have increased from 68 in 2019 to 85 this year. At the same time, the number of human visitors has dropped by 50 percent.

The Divjaka-Karavasta National Park is near the Mediterranean Sea and covers around 22,000 hectares. That includes a long sandy beach, a saltwater lagoon with small islands and an area of pine forest. The park is 90 kilometers southwest of the capital, Tirana, and is home to 260 kinds of birds. 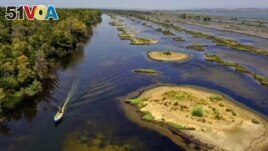 But the national park is best known for the giant Dalmatian pelicans on Pelican Island. They spend the months of December to June there. It is their only nesting colony in Albania.

Pelicans are huge birds that reach close to two meters in length. The birds' wings can measure three meters across. They also are an endangered animal in Albania, where their numbers fell to 19 nesting pairs about 20 years ago.

"Peace and quiet during the pandemic has helped us a lot in the preservation of Pelican Island," said Adrian Koci. He leads an agency that works to protect the environment.

In 2014, Koci and fewer than 24 of his workers started to take care of the small island.

People in boats were banned from going closer than 180 meters. And a 24-hour guard was put to work in a small building across the water to protect the birds. Small wooden fences along parts of the waterways prevent coastal damage.

Koci observes the island with a drone from January to June during the mating period.

"We have freed the island of the fishermen who disturbed the pelicans," he said. This group also has raised the birds' nest to protect them from the water. But intensive fishing has still "reduced the number of fish the pelicans eat," he explained.

Koci is an animal doctor who also cares for other injured birds in neighboring Kosovo and Montenegro. A few years ago, the United Nations Development Program (UNDP) helped him launch Albania's first bird recovery center.

A rare vulture bird found injured in Montenegro was treated for two months there and then let free to continue its trip toward Africa.

Two Dalmatian pelicans, named Johnny and Vlashi, have called the center home for the past three years. Johnny cannot fly because of a damaged wing. But Vlashi can, and both are calm with visitors. Workers think of the birds as part of their family and often buy fish to feed them.

Since the early UNDP support, the center has had little financial help. Now, it gets money from donors, a small volunteer money-collecting box, and even donations from its workers.

The place is becoming increasingly popular with visitors. But that is not always a good thing with birds that need calm to reproduce. Visitor numbers rose from 1,300 in 2014 to 550,000 in 2019. Last year, however, that number was cut in half because of the pandemic. But workers said it would be better if the visitors returned because donations are needed.

Koci is urging local officials to replace the engines of the five boats used by visitors with electric ones, or to put in more solar power.

Limya Eltayeb is a UNDP representative. She said the organization is supporting Albania in using "nature-based solutions" in Divjaka and other places. She said the UNDP is also helping the center become more independent beyond the small state financing and private donations.

Klara Perinova, who is 28 years old, came from Prague to spend two weeks in Albania with her boyfriend. She praised Divjaka's "undiscovered beauty."

"We're here (because) you have a very beautiful nature...not the same nature you can see in other parts of Albania," she said.

lagoon –n. an area of sea water that is separated from the sea by an area of sand or a reef

nesting pair –n. a female and male bird that begin to prepare a nest to have eggs and raise young

wing –n. the part of an animal's body used to fly

preservation –n. the act of taking care of something to keep it in good condition

drone –n. a kind of small aircraft that flies without a pilot in it

disturb –v. to worry or cause to be upset