Update Required To play the media you will need to either update your browser to a recent version or update your Flash plugin.
By Dan Friedell
16 June, 2016


The United States Department of Defense developed some of the technology that led to the internet.

Defense department workers built what they say was the first workable model for the internet many years ago. The goal was for U.S. universities and researchers to share information. Later, the goal became data sharing between the U.S. and other countries.

Because of that work, and others, the world is now more connected than ever. There is more information stored online than any of the internet's creators could have imagined. But that also means it is harder than ever to keep important data safe from criminals.

Steve Welby is the Defense Department's Chief Technology Officer. He spoke with VOA about some of the issues the department faces in protecting its information from cyber attacks. 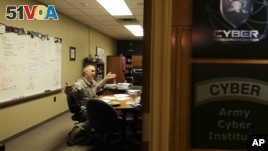 Colonel Gregory Conti, military intelligence director of the Cyber Research Center at the United States Military Academy, sits in his office in West Point, N.Y., Wednesday, April 9, 2014. A team of Conti's West Point cadets is fending off cyber attacks this week as part of an exercise involving all the service academies. The annual Cyber Defense Exercise requires teams from the five service academies to create computer networks that can withstand attacks from the National Security Agency and the Department of Defense. (AP Photo/Mel Evans)

Welby says the growth of data available on computer systems is "both an opportunity and a challenge."

Almost everything the Department of Defense does involves some kind of software, he notes. And if a hacker attacks a small weakness in a program, it can bring down an entire wall of cyber defense. That is why he believes that defending cyberspace may be just as important as defending air, land, sea and space.

But that kind of work is not always easy.

James Lewis is Strategic Technologies Program Director at the Center for Strategic and International Studies.

He says the tradition of using simple "Band-Aid" solutions to correct small problems in cyber defense is a mistake.

Lewis says there are other militaries with computer experts that are as good as those in the United States. He says hackers will eventually find ways through virtual walls if they have time and resources.

"It's not so much that our defenses are weak," Lewis says. "It's just that they are hard to defend against."

Welby says the Defense Department is trying to develop systems that are easy to defend, instead of turning to products from the marketplace.

Lewis says one problem the department faces is that some of its computer systems are very old. And old systems are hard to protect.

But help could be on the way.

U.S. Defense Secretary Ash Carter is working with technology developers who may be able to improve defenses in the U.S. Carter met last week with Elon Musk, the founder of SpaceX and product developer of Tesla Motors.

Carla Babb wrote this story for VOANews. Dan Friedell adapted it for Learning English. George Grow was the editor.

Do you think there will be a new way to keep data safe on the internet? We want to know. Write to us in the Comments Section or on 51VOA.COM.

bug – n. a problem that prevents a computer program or system from working properly

Band-Aid – adj. related to the brand name of small bandage; able to help or improve something only for a short period of time

network – n. a system of computers and other devices (such as printers) that are connected to each other

data – n. information that is produced or stored by a computer