Pentagon Wants to Expand US Military Efforts in Somalia

Update Required To play the media you will need to either update your browser to a recent version or update your Flash plugin.
By Phil Dierking
05 March, 2017


Experts are concerned about increasing attacks by the Islamic militant group al-Shabab in Somalia.

In the past few weeks, the group has increased suicide bombings of Somali hotels and military targets.

These attacks have caused the Trump Administration to consider increased military involvement in the country. Experts say that current actions, such as drone attacks, are not enough.

U.S. officials have said the Defense Department wants to expand the military's ability to fight the al-Qaida-linked group. They have recommended that the Trump administration permit U.S. Special Forces to increase assistance to the Somali National Army. Defense officials also want the U.S. military to have the ability to launch pre-emptive airstrikes.

Analysts say new efforts in Somalia will be difficult and costly. The appearance of fighters pledging allegiance to the Islamic State group has made the situation more complex.

Rashid Abdi is an expert on the Horn of Africa area with the International Crisis Group.

"The concern in Washington has been mounting for some time now. The Trump administration is simply reiterating what has been policy, with slight variations," said Abdi. "U.S. special forces are already on the ground. Drone attacks have been scaled up." 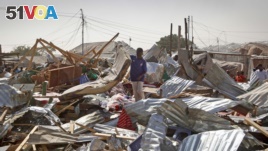 A shopkeeper surveys the wreckage of shops destroyed by a blast in a market in the capital Mogadishu, Somalia, Feb. 19, 2017.

There are currently about 50 U.S. advisers in Somalia. They move in and out of the country to advise and assist local troops. The soldiers have accompanied Somali forces in several raids against al-Shabab fighters, according to Somali intelligence officials. Many fighters were killed in these raids, the officials said.

Somalia has been without an effective central government since the fall of leader Siad Barre in 1991. It is also one of the seven mainly Muslim countries whose citizens would have been temporarily banned from traveling to the U.S. by a presidential order. Federal courts have suspended that executive order.

Al-Shabab rose to strength during the many years in which Somali lacked an operating government. Several years ago, a collaboration of African Union troops pushed the extremist group from the capital, Mogadishu, and most other urban areas.

However, experts say that push against al-Shabab has weakened, and has allowed the group to regroup and to operate in the rural areas of the country. This has permitted attacks in Mogadishu.

A need for training

In the past year, the U.S. launched 14 airstrikes. According to a Somali intelligence official, these attacks resulted in the deaths of some top al-Shabab leaders, including Hassan Ali Dhore and Abdullahi Haji Daud.

However, the main military successes against al-Shabab have come from the African Union regional force in Somalia. They include about 22,000 troops and have operated in Somalia since 2007.

The AU force plans to withdraw by the end of 2020. Cost is a main reason for the withdrawal. The mission's yearly budget has risen from $300 million in 2009 to $900 million in 2016, said Ahmed Soliman, an analyst with Chatham House, the London-based think tank.

If the African Union troops leave, the Somali army will have to fight al-Shabab alone. However, some observers consider it weak and disorganized.

According to Soliman, the U.S. military will probably increase training and coordination. But it is unlikely to put more American soldiers in Somalia.

Al-Shabab militants continue to control towns and villages across the south and central parts of the country.

He said, "It's only al-Shabab that can stand in ISIS' way to expand its areas of operation." Somali forces are currently too disorganized to stop the new group.

This story was originally written for the Associated Press. Phil Dierking adapted this story for Learning. Mario Ritter was the editor.

Do you think increased training is the solution to peace in Somalia? What are other ideas for helping bring stability to the region? We want to hear from you. Write to us in the Comments Section or on 51VOA.COM.

airstrike – n. an attack made by aircraft.

pre-emptive – adj. done to stop an unwanted act by another group, country, etc., from happening

reiterate – v. to repeat something in order to emphasize it or make it very clear to people

urban – adj. of or relating to cities and the people who live in them