Update Required To play the media you will need to either update your browser to a recent version or update your Flash plugin.
By Marsha James
17 August, 2016


His name is Dr. Anthony S. Fauci. Some Americans may never have heard of him, but his work affects tens of millions of people. Fauci is the United States' top doctor when it comes to infectious diseases.

He leads the National Institute of Allergy and Infectious Diseases at the United States National Institutes of Health. It investigates emerging diseases like Zika and Ebola. It also leads research into diseases HIV/AIDS, tuberculosis and malaria and allergies.

Fauci studied at Cornell University Medical College. He then completed his internship and residency there. 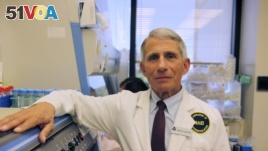 Dr. Fauci says he likes talking about science to the general public in a way they can understand why it is important to support it. Fauci says it was his education at a Catholic high school in New York that influenced him to consider a career in healthcare.

"Well, I was born and raised in Brooklyn, New York. My father is a pharmacist, so I had some exposure to the health issue, but I don't think that was the major thing leading me in to medicine. It was mostly training in high school and college by the Jesuits, who taught humanities, classics, Greek, Latin. So I became much more of a humanitarian-type person than a scientific-type person. So, I figured the best way to combine an aptitude toward science with a desire to do something that strongly that relates to people and taking care of people, you put all of those things together and you come up with the field of medicine, in my mind."

In 1968, Fauci came to the National Institutes of Health (NIH) as a clinical associate in the Laboratory of Clinical Investigation in NIAID. Since then he has held many important positions, including chief of the Laboratory of Immunoregulation, a position he still holds.

Dr. Fauci also has made many contributions to basic and clinical research on the pathogenesis and treatment of immune-mediated and infectious diseases.

Acquired immune deficiency syndrome or (AIDS), in particular, is one of those infectious diseases.

Just as AIDS was beginning to kill thousands of young men across the country, Dr. Fauci was there doing research at NIH. He helped change rules in order to approve drugs for the virus and the disease. In time, these new treatments turned HIV/AIDS into a manageable condition. An HIV or AIDS diagnosis was no longer a death sentence.

"When we first got involved in studying what turned out to be AIDS, we didn't even know what the agent is that caused AIDS. All of the research that was funded by the NIH and our collaborators and people down here have led everything from the identification of the agent, the development of diagnostics, to the combinations of drugs that we now have that can actually get a person with AIDS or HIV infection to live, essentially, a normal lifespan. That's one of the most impressive medical advances in the history of medicine."

Dr. Fauci is the recipient of many awards. President George W. Bush presented him with the nation's highest civilian honor, the Presidential Medal of Freedom. Bush said Fauci's work on AIDS in Africa reached millions of people, "preventing HIV infections in infants and easing suffering and bringing dying communities back to life."

"One of the moments, among the few, and I'll just mention a few, that I'm most proud of in my life, my role as the director of an institute that funds most of the research in infectious diseases and the drive toward the development to what now turns out to be lifesaving therapies for a number of diseases, but particularly HIV/AIDS.

"We've also developed a number of vaccines against very important diseases. And importantly, in 2002, President George W. Bush asked me to go to Africa to see if I could put together a program that would provide life-saving interventions in HIV, a program which ultimately came to be known as the President's Emergency Plan for AIDS Relief, or PEPFAR, which already has been responsible for saving several million lives in the developing world."

Try this quiz to practice your listening skills and check your understanding.

Next time on People in America, Dr. Fauci talks more about infectious diseases and his role at National Institute of Allergy and Infectious Diseases.

institute – n. an organization created for a particular purpose (such as research or education)

allergy – n. a medical condition that causes someone to become sick after eating, touching, or breathing something that is harmless to most people

pharmacist- n. a person whose job is to prepare and sell drugs and medicines that a doctor prescribes to patients

exposure – n. experience of something

Jesuits –n. a man who is a member of a religious group called the Roman Catholic Society of Jesus

humanities [plural]- n. areas of study that relate to human life and ideas

aptitude – n. a natural ability to do something or learn something

pathogenesis – n. the development of a disease

immune – adj. not influenced or affected by something

collaborators – n. a person who works with another person or group in order to achieve or do something